An engineer studying for his PhD at the University of Canterbury is simultaneously researching the aerodynamics of asymmetrical vehicles and setting world land-speed records. 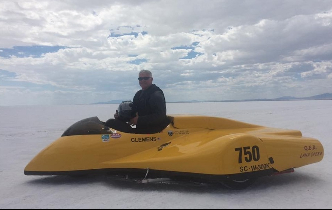 American engineer and high-performance motorsport enthusiast Kevin Clemens is studying mechanical engineering at UC. His doctoral thesis topic grew from his passion for setting land speed records with alternatively powered motorcycles. Clemens travelled to Utah's famous Bonneville Salt Flats in the US, aiming to set a new land-speed record with a twist.

An engineer studying for his PhD at the University of Canterbury is simultaneously researching the aerodynamics of asymmetrical vehicles and setting new world land-speed records.

Clemens travelled to Utah’s famous Bonneville Salt Flats in the US, aiming to set a new land-speed record for a sidecar motorcycle, with a twist. He converted a petrol-powered three-wheeled sidecar motorcycle into an all-electric partially streamlined machine with an asymmetric cross-section.

Clemens has constructed a series of electric motorcycles in his workshop in the US and already set world and US national records at the legendary salt flats.

He has been working with the University of Canterbury’s wind tunnels and Blue Fern supercomputer to develop designs with greater aerodynamic efficiency to attain faster speeds, while keeping the machines firmly planted on the ground. In the history of land speed record attempts, as speeds notched upwards, vehicles would occasionally become airborne.

“He’s broadened his already impressive engineering skills by learning to do computational simulations of flow at the University of Canterbury. Using the supercomputers, he’s been able to redesign his vehicle to bring down the drag and improve the stability and safety. Electric vehicles are no longer slow.”

Despite the twin-motor electric drive ‘acting up’ during this year’s record attempt, Clemens set four world records and a US national record (subject to ratification by the sanctioning bodies) with the electric sidecar.

Top speeds of 115mph were slower than expected, but Clemens is looking on the positive side.

“It gives us something to shoot for next year,” he says.

Clemens has now set 14 records at Bonneville and an additional four regional records at airport courses around the US.

Clemens has taken part in many exciting journeys, including driving around the world in 2000 in a 1959 Mercedes-Benz and competing in 2007 in the 35-day Beijing to Paris rally in a 1929 Chrysler Model 75 Roadster. He has driven north of the Arctic Circle in the dead of winter, across the searing deserts of China and Mongolia in the heat of summer, through perils in the republics of the former Soviet Union, in 55 countries.

You can follow his progress on his team’s Facebook page and find out more about his chasing land speed records with electric motorcycles at his website.