An innovative Māori research group at the University of Canterbury has won a national award for education research excellence. 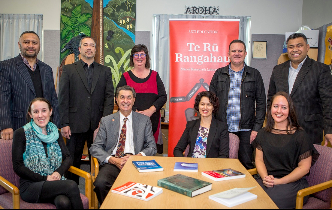 An innovative Māori research group at the University of Canterbury has won a national award for education research excellence.

Since its inception following the Christchurch earthquakes, Te Rū Rangahau has become influential within the University of Canterbury’s College of Education, Health and Human Development and the NZARE citation described it as “a pivotal part of the development of Māori research” at UC.

The award citation stated that a key feature of Te Rū Rangahau’s success is its foundation in Te Ao Māori. It is Māori-led and exemplifies how Matauranga Māori can be woven into traditional Western research approaches to realise more meaningful research outcomes.

Victoria University Education Professor Wally Penetito has said of the lab “… its researchers, its activities, and its mauri abides by the essence of concepts and values from Te Ao Māori” and in doing so “makes a valuable contribution to local, national and international research”.

Director of Te Rū Rangahau Professor Angus Macfarlane accepted the award, describing it as an honour for the University.

“It is fitting recognition of the range of research projects that have been conceptualised and theorised by the research team, then expanded beyond the campus and into the tribal and national communities. It is also ‘home’ for many postgraduate scholars – Te Rū Rangahau takes seriously its responsibility to grow Māori and indigenous talent.”

The research undertaken by Te Rū Rangahau has been described as wide ranging and relevant to the needs and aspirations of Māori and indigenous peoples. With a focus on collaboration, connections and networks have been established with researchers located throughout Aotearoa and internationally, resulting in engagement in a large number of projects.

Professor Gail Gillon, Pro-Vice-Chancellor of UC’s College of Education, Health and Human Development, is part of the research lab’s leadership team and gave credit to all Māori research groups throughout the country who work hard across disciplines to enhance outcomes for Māori.

“Examples of this can be seen in the National Science Challenges where research groups are collaborating their activities so as to unleash Māori potential – an expectation of the government policy Vision Mātauranga,” she says.

“He rā whakanui tēnei mo tātou katoa. This is an important achievement for all involved in Māori research here at UC. Many of the research lab’s activities seek to unpack the challenges and opportunities that we face individually and collectively.”

UC student Melissa Derby, whose doctoral thesis will contribute to the literacy strand of the ‘A Better Start: E Tipu e Rea’ National Science Challenge, has a particular interest in advancing Māori education and has studied Indigenous Studies at Columbia University in New York. She described Te Rū Rangahau as having a special ambience.

“It is a place where whai mātauranga (knowledge seeking) and manaakitanga (ethos of care) are the norm,” she says.