The University of Canterbury joins the Disarmament & Security Centre marking 20 years since a historic judgment by the International Court of Justice on nuclear weapons. 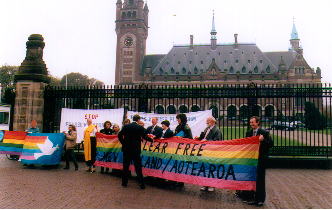 Political leaders, international law experts, diplomats and anti-nuclear campaigners will meet in Christchurch on Friday, 8 July, to mark a pivotal moment in global legal history that was sparked by a group of determined New Zealanders.

The University of Canterbury will join the Disarmament & Security Centre in marking 20 years since a historic judgment by the International Court of Justice (ICJ) on nuclear weapons, with two special public events.

The momentous ICJ judgment on the legal status of nuclear deterrence was the culmination of the World Court Project. This was an international campaign by a   network of citizen organisations pioneered by a core group of New Zealanders, several based in Christchurch. They helped persuade the United Nations General Assembly to adopt a resolution asking the Court the question: ‘Is the threat or use of nuclear weapons in any circumstance permitted under international law?’

Though not binding and highly controversial, the judgment established a new norm regarding the legal status of nuclear weapons, which has been built upon in subsequent anti-nuclear campaigns.

UC Deputy Pro-Vice-Chancellor of the College of Arts and Head of the School of Humanities and Creative Arts, Professor Paul Millar is coordinating the 20th anniversary events.

“Because the World Court Project was born in Christchurch, it is fitting that the University of Canterbury is co-hosting two major public events, with the enthusiastic support of the heads of the Law School, Political Science, History, and Creative Arts departments,” Professor Millar says.

“A symposium at UC will feature international speakers, including former New Zealand prime ministers, the Rt Hon Sir Geoffrey Palmer QC and Rt Hon Jim Bolger, respected lawyers, diplomats and veteran anti-nuclear campaigners from the Project. They will outline the history, explain the case, examine the impact of the judgment, and consider its implications for the future.”

The day-long symposium will be followed by an evening celebration held at the Transitional Cathedral. In a forum chaired by the Mayor of Christchurch Lianne Dalziel, key participants including Rt Hon Jim Bolger and Dr Kate Dewes, will share their experiences. Among the evening’s musical offerings UC’s newly appointed Professor of Music Performance, Mark Menzies in his first public appearance in his new role, will perform Pau Casal’s peace anthem ‘Song of the Birds’.

Quotes on the Impact of the ICJ Case on Nuclear Weapons:

“[It was]...the most important case that ever came before the international court. So many countries making submissions; we had witnesses, we had weeks of hearings and deliberations, and it was an issue of importance to the entire history of the world, because my personal view is that the future of humanity depends, to a large extent, on our being able to get rid of nuclear weapons.” - Christopher Weeramantry (Sri Lanka), ICJ Vice-President 1997-2000

“As with other normative projects, such as the abolition of slavery and the repudiation of apartheid, perseverance, struggle and historical circumstance will shape the future with respect to nuclear weaponry, but this process has been pushed forward in a mainly beneficial direction by this milestone decision of the World Court.” - Richard Falk, US Professor Emeritus of international law, Princeton University

“The decision is a watershed. Some of the judges who had voted against the decision to declare nuclear weapons generally illegal had done so because they wanted to go further. The majority of the Court are in fact on the side of declaring nuclear weapons illegal. That is something no-one could have been confident of when we went to the Court.” - Rt Hon Jim Bolger, NZ Prime Minister, 1996

“This ruling is a major step forward in international law.”  - Rt Hon Helen Clark, NZ Leader of the Opposition, 1996

“The finding of the ICJ is fundamental in underpinning our [the New Zealand Government's] ongoing calls to move the nuclear agenda forward and in seeking the eventual elimination of the weapons. We constantly use it as a reference point for our efforts.” - Rt Hon Don McKinnon, NZ Foreign Minister, 1998

Professor Paul Millar, Deputy Pro-Vice-Chancellor of the College of Arts and Head of the School of Humanities and Creative Arts, University of Canterbury, Ph: +(03) 364 2313, paul.millar@canterbury.ac.nz