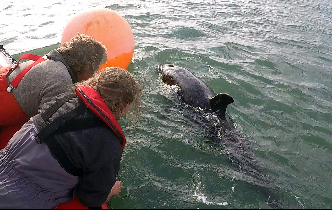 UC marine scientist Dr Ingrid Visser (right), director of the Orca Research Trust and Adjunct Fellow at UC's Gateway Antarctica, is leading the efforts to save an orca calf with help from a killer whale expert from the United States, Jeff Foster (left).

A baby orca separated from its family is the focus of a rescue mission uniting University of Canterbury marine scientists, DOC staff, local Iwi and residents on the North Island’s east coast.

Marine mammal scientist Dr Ingrid Visser, Director of the Orca Research Trust and Adjunct Fellow at the University of Canterbury’s Gateway Antarctica Centre for Antarctic Studies & Research, is leading efforts to save the young killer whale calf, under way near Tauranga.

On Wednesday, the calf was moved out of a tidal channel into a seawater pool to get it out of the current and allow scientists to provide electrolytes and food.

“We think the calf is only a year old and got accidentally separated from his family,” says Dr Visser, whose work appeared in the acclaimed documentary about captive orca, BlackFish.

“Orca are extremely social and the calf was treating a large orange buoy in the tidal channel as a security blanket. He never moved further than 20 or 30 metres away from it,” she says.

As well as gathering a team of volunteers to help, Dr Visser also recruited a killer whale expert whom she has flown in from the United States. Marine mammal expert Jeff Foster, from Seattle, has vast experience rehabilitating whales and dolphins, including Keiko, the killer whale star of the movie Free Willy.

“The whale calf is too young to be alone and has probably been without food for at least two if not three weeks,” Dr Eisert says.

“Young animals are more vulnerable to starvation than adults. In addition, killer whales have exceptionally large brains that need a lot of fuel, and this decreases their ability to go without food for prolonged periods.  Based on his size and condition, I estimated that the calf could not survive for more than four weeks, so there was an urgent need to initiate re-feeding measures.”

DOC has organised a taskforce to co-ordinate rescue activities, which have been unfolding for the last 15 days. The UC marine scientists praised DOC and the locals for their support.

“The response from the local community has been amazing - everybody has rallied to help the young orca,” says Dr Visser.

On Saturday, kaumatua Reon Tuanau from Ngāi Te Rangi performed a karakia (blessing ceremony) on the beach close to where the young killer whale. On Wednesday, 3 August the calf was successfully transferred to a seawater pool and appears to be doing well.