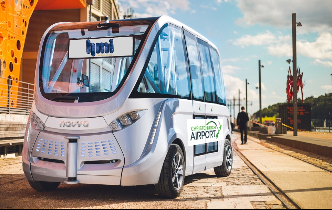 The University of Canterbury's hi-tech researchers are playing a vital part in trialling New Zealand's first fully autonomous electric vehicle. The trial involves a French Navya 15-person shuttle, which is fully autonomous, has no steering wheel and is electric powered.

UC researchers and developers will help design and undertake the trials, to be conducted at the Christchurch Airport.

The head of HIT Lab NZ, Professor Rob Lindeman, says he is excited about being part of shaping how autonomous vehicles will be used in New Zealand.

“The design of these trials puts the New Zealand public at the centre of the work, by incorporating their views into the overall rollout of the technology. This helps demystify the technology, and educates people about that we are really talking about when we use terms like ‘autonomous electric vehicle’.”

The trial involves a French Navya 15-person shuttle, which is fully autonomous, has no steering wheel and is electric powered.

“These days, driverless shuttles are common at many international airports to move people between terminals, and people don’t seem to mind, since the shuttles are on closed tracks. How well will people accept them when they are on more open roads, such as moving people from the terminal to a satellite parking structure, or moving them from the terminal to the CBD?” Prof Lindeman says.

“By including the public at each step of the roll-out this trial has the potential to raise the level of acceptance and success of this and similar projects in New Zealand, and gives deep insights beyond our borders to others looking to introduce autonomous electric vehicles.”

The Director of UC’s WRC and SERC, Fred Samandari, says that these vehicles need to have a constant view of their surrounding environment to be used on open roads.

“In addition to vision capabilities, these cars require secure, robust and fast wireless communication with buildings, other vehicles, road sensors, and so on. These cars also need to be able to navigate from starting point to destination without a need to extensively pre-program and train them.

“These are the areas that the Wireless and Spatial Engineering Research Centres will be working on to assist with the wider deployment and uptake of autonomous vehicles,” he says.

The vehicle is expected to arrive in Christchurch before Christmas, with the trial scheduled to begin early in 2017. Christchurch City Council, the Ministry of Transport and New Zealand Transport Agency will also be involved in the trials.