UC Geological Sciences staff and doctoral students have been carrying out reconnaissance investigations of the surface faulting post-quake. 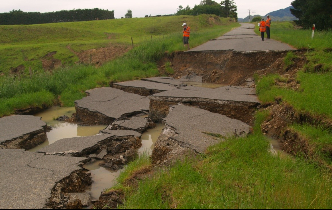 Staff and doctoral students from the University of Canterbury’s Department of Geological Sciences have been carrying out reconnaissance investigations of the surface faulting from the 14 November M7.8 Kaikoura earthquake.

Limited road access has meant that the efforts have been concentrated in the North Culverden Basin and along the Inland Route as far as Mount Lyford.

The first stop was to record a prominent displacement across SH70 north of Waiau.

Pell, Sullivan & Meynink Senior Lecturer in Engineering Geology Dr Clark Fenton says this was a fortunate first choice as 90 minutes later, a roading crew made temporary road repairs at the site, removing the important details of the fault rupture.

“This highlighted the importance of rapid field response to capture perishable scientific data. The fault trace was obvious from the road across the adjacent paddocks as a prominent scarp (step) marked by tears and fissures in the ground. Measured displacement is up to 2.2m in a horizontal direction and up to 1.5m in a vertical direction,” he says.

While walking along one of the fault traces, the team also rescued a lamb from a 1.5m deep fissure, Dr Fenton says.

The first day’s reconnaissance also located a broad, complex zone of faulting extending from the Masson River, about 6km northeast of Waiau, across the Waiau River flood plain to Emu Plain, about 9km west of Waiau. The total zone of faulting is about 3km across.  Most of the faulting has occurred on fault traces that had not been previously mapped.

A second reconnaissance mission on Friday (18 November) saw Prof Pettinga and Dr Fenton joined by Dr Kate Pedley and Dr Narges Khajavi. They covered an area from the western end of the Amuri Range, back across the Emu Plain and continued as far as the junction for Mt Lyford Village. All roads beyond this point are closed and only passable by military vehicles.

Further fault traces were located across the Emu Plain, highlighting further complexity in the fault structure.  Although no clear evidence for faulting was discovered to the east of the Mason River, this was identified as an area for further detailed study.  Much of the Mason River valley is affected by large scale landsliding, particularly in the area around Mt Cookson.

“Spectacular fault displacements were observed across Leslie Hills Road at the eastern end of the Emu Plain.  As well as fault rupture, this area has suffered from widespread liquefaction, causing extensive damage to local roads,” Dr Fenton says.

The next phase of these investigations began this week with a number of teams dispatched to carry out detailed surveys of the fault traces. This information is vital for understanding the nature of this earthquake and for quantifying seismic hazard, he says. In particular it informs engineering design decisions for earthquake fault rupture mitigation.  It is expected weeks more of intensive field investigation will be required.