University of Canterbury scientists have been keenly observing the effects of the seismic uplift of 14 November on the coastal areas of Kaikōura. 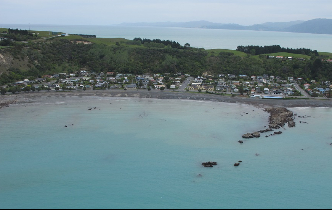 University of Canterbury scientists have been keenly observing the effects of the seismic uplift of 14 November on the coastal areas of Kaikōura.

University of Canterbury (UC) marine biologists Dr Sharyn Goldstien and Professor Islay Marsden along with UC coastal geographer Dr Deirdre Hart and NIWA ecologist Dr Graham Fenwick, have been exploring the Kaikōura reefs to investigate the richness of species finding refuge in the altered reefs of the peninsula.

Each time I have visited the reefs of the Kaikōura peninsula since the earthquake, the tides have been different. This week, the spring tides presented an opportunity for us to explore areas we are familiar with, as well as new areas that we were unable to explore previously without snorkelling.

This past weekend saw the first set of spring tides since the earthquake and it seems to have given the shore a bit of a springclean. Some of the stagnant pools have been refreshed and the dead seaweed removed from the rocks, probably washed ashore to nourish one of the many mixed-gravel beaches along the coast.

UC marine biology students back to the 1980s will testify to the joy of exploring the shore with Professor Islay Marsden; she knows all species in all habitats and is as enthusiastic about finding the smallest amphipod in a drift line of rotting algae as she is to see a beautiful anemone. This weekend was no different as we explored, and with every boulder turned and every crevice eyed, we found live individuals of species that have recently been reported as dead or missing in action.

Yes, the uplift from the earthquake has had a significant impact on many coastal species. However, the peninsula remains a place of high species richness. Biodiversity includes both a measure of species richness [how many species are present] and a measure of abundance [how many individuals of each species are present]. At this stage the abundance of species is yet to be determined, but this weekend we were very encouraged by the richness we observed.

The uplift has significantly altered rocky reef platforms. In some areas, broad platforms once covered in marine life are now covered in decaying seaweed and empty shells of limpets discarded after seabird feasts. However, new platforms are now open to be explored and are full of life, currently adjusting to the new tidal regimes and altered water flow.

After a small experiment – well, simply adding water – Prof Marsden and Dr Graham Fenwick were able to confirm that even the tiny littorinid snails (Austrolittorina unifaciata) were alive after a month of living above the high tide. These snails are very well adapted to living high in the splash zone, and to my surprise were very much alive, and, now refreshed with splash from the new spring tide, they are ready for the next period of desiccation. How long can they survive this regime? Hopefully long enough to find refuge closer to the neap tide splash zone.

Vertical zonation of species is a universal pattern by which you can generally identify the height of the tide at various times throughout the tidal range – known as intertidal species [living within the area affected by the tidal rise and fall]. For example, the large brown algae are known to occur only at the very low intertidal zone, or they are always covered by water [subtidal – below the intertidal zone]. The southern hemisphere neptune’s necklace is a smaller brown seaweed that can be found into the mid-intertidal.

The animals are also zoned. For example, the cat’s eye snail (Lunella smaragdus) is generally low intertidal and subtidal in distribution, the limpets hold dominance in the mid to high intertidal zones, while the smaller littorinids thrive in the high intertidal to above the intertidal (splash zone).

Large vertical rocks are the best places to observe this zonation. Previously we would work at the edge of the Woolloomooloo Channel on the peninsula over a vertical height of only two metres. We have now set transects to observe the change in the zonation of the species over a height of three metres.

The changes will be dramatic in the lower zone, but we predict a simple shift of the intertidal species to match the new tidal regime as there are plenty of individuals alive on the rocks working out their new schedule – watch this space!

Dr Deirdre Hart’s expertise is in understanding the formation and nourishment of beaches. This past weekend, she was able to observe mostly positive change in the mixed-gravel beaches between Kaikōura and Mangamanu.

It appears the mixed sand and gravel beaches are rapidly reforming new beach profiles and foreshore berms in response to the uplift. There is plenty of sediment in some lower shore areas, under the breaker zone, to construct the new foreshore berm, with some exceptions, such as the area adjacent to the town’s former coastal swimming pool, where sediment still appears somewhat limited.

The uplift of near-shore rocks and reefs has potentially created additional sheltering of parts of the beaches, and most of the recently placed beach nourishment in front of the southern end of the township may now be expected to last longer or be mobilised at first during large storm conditions, as the nourishment sits above the spring high-tide level.

River and hillside slips have the potential to inject new coarse sediment into the beach systems of the northern township and south of the peninsula, nourishing some of these catchments for years, perhaps for decades. There is currently little evidence of fine sediments released by the earthquakes affecting the systems – and observations from the Canterbury Earthquake Sequence indicate that any effects from fine sediments will be short lived in the beach systems of an energetic open coastal environment such as Kaikōura.

The Kaikōura region remains one of the most stunning coastal environments internationally.