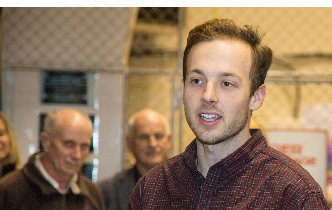 The University of Canterbury's Dr Alex O'Keefe, 28, is creating an artwork designed by Len Lye, a Christchurch artist known for experimental films and kinetic sculptures. UC Journalism student Hannah Samson-Barry interviewed him about motorcycle racing and skateparks as well as his work at UC.

The University of Canterbury’s Dr Alex O’Keefe, 28, is bringing to life one of the artworks designed by Len Lye, a Christchurch artist known for experimental films and kinetic sculptures. UC Journalism student Hannah Samson-Barry interviewed him about motorcycle racing and skateparks while she was interning for the Southern View newspaper.

I work in the field of mechanical engineering research at the University. Part of this role is a small amount of teaching and mentoring. I really like working at UC because of the exposure to a wide range of different fields of study in such close proximity, it’s a five-minute walk from Fine Arts to firing lightning bolts in the Electrical Engineering department (High Voltage Lab).

You made the move from Queenstown? Why the shift?

I came to Christchurch because, after working for a year in Queenstown after I finished high school, I realised that I wasn’t doing anything with my life, so my parents suggested engineering as a pursuit. Canterbury University had the best reputation in New Zealand and it’s reasonably close to home. So I enrolled for first year engineering and moved up here.

Can you tell me about life before you became a doctor, what was it like growing up in Queenstown?

Queenstown was a crazy place to grow up. It’s the adventure capital of New Zealand so it was a lot of fun. Small town vibes but with more of a city feel so we got the best of both worlds. It’s safe and fun and great.

How did you get into Engineering, you mentioned your parents?

Yes, my parents recommended it as a course of study. I had no idea what it was other than basically building bridges. After the first year of Engineering you figure out what the different disciplines are and Mechanical Engineering was a fit in terms of the fact that I like solving practical problems and working with my hands and doing projects.

How did you first become involved with Len Lye’s work?

After I finished my degree I was looking for employment as a mechanical engineer and I was obligated to be in the city at the time but none of the jobs that I could find I found enough interest in or thought I’d be happy there. I looked at the postgraduate curriculum at the University of Canterbury and one of the projects that was offered was this Len Lye project that I work on and to me that sounded like the biggest challenge I could imagine. So that’s the first time I heard of Len, I researched him, figured out who he was and his background and decided that this was the project for me.

How is it bringing these great ideas and designs to life?

Len Lye projects are fascinating to work on because part of it is that you get to search through all of his notes, drawings and all of the material that he produced on an artwork.

Things that other people never get to see. You get to work with small models that he made so then your job as an engineer is to translate all of these intentions as an artist into a piece of art that he would have been happy with.

So it’s inspiring as you get to see subtleties of the reasons why he wanted this motion because it had these intricacies and chaos in there that was so exciting. So when you find these things out and come to understand what Len was trying to create it’s really fulfilling when you get to that point when you’ve worked towards an art piece that will be a Len Lye artwork.

It’s also kind of stressful because Len gives you these crazy challenges where he says shoot a 30-metre lightning bolt across the sky and I want things to lift up 100 metres into the air.

So he was limitless in his imagination but as an engineer you are very limited in what you are capable of, so you have to come up with clever ways that you can bring to life Len’s ideas, even though they were grand scale and crazy.

Why do you persevere with these projects?

I guess because we are working towards a goal and I can see the end result, and the end result is that we get to share Len Lye, who is one of New Zealand’s and the world’s most renowned artists of the 20th century. We get to share these visions that he had with everyone and show why this guy was such a spectacular and inspiring artist. So I see the end goal as being a really fulfilling result of these projects.

After spending so much time there, what do you think of the University of Canterbury?

I do think it’s quite a spectacular place and I do think the pursuit of Engineering, whatever discipline it might be, or the Sciences for that matter, is the best pursuit for anyone who is mechanically or scientifically minded. By going through the Engineering courses at Canterbury you not only give yourself the skills, and technical skills you get from the course, but it gives you a new analytical way of looking at your life. And it allows you to take on projects outside of work like motorbike racing which I would have never done without being at Canterbury. And understanding that you can achieve these things and these people that do them, they are not this tier above – just being confident enough to tackle these problems.

Do you get any downtime when you’re not working on these projects?

Yes, I have downtime. But in my downtime I like to work on other projects. I treat these projects as a job but outside of that I have time to skateboard and ride motorcycles and pursue other interests of mine.

Tell me more about the motorcycle racing; how did that begin?

Being in the Mechanical Engineering department at UC, engines and motor vehicles are an integral part of that whole course and community. So I was placed in an office with two other motorcycle racers and, as with anyone that seems to be with the Engineering department post-grad, they were infectiously enthusiastic about the sport. It rubbed off on me and I got tricked into being part of it. No regrets at all.

What’s your motorcycle of choice?

What is your favourite place to go on your motorcycle?

Up the Summit Rd and around Godley Head in the summer, or at the Mike Pero Motorsport Park (Ruapuna).

How about skateboarding, didn’t you help bring about a new skatepark in the city?

As part of a marketing campaign an American company Levi’s and Monster Children sent their professional skateboard team to Christchurch to help build a new skatepark for the city which had suffered from the major earthquakes. So they linked up with me and a bunch of other local skateboarders and we got together with the youth and we built a small DIY skatepark at the stockyards, so give something back to the community. They gave something back, I just helped. It is there to be used for everyone and we encourage anyone to maintain or improve it as they wish.

What are the best places to skate?

Christchurch is a great place to skate due to wide range of small skateparks in the wider city. Templeton, Rolleston, Belfast, Leeston, Kaiapoi all have relatively recent skate parks which offer a diverse range of things to skate. These small community initiative skateparks are a great thing for kids and big kids alike.