The 300 people who were quick enough to get tickets will see Martian scenery and learn about NASA rover Curiosity's most interesting discoveries from a senior NASA scientist. 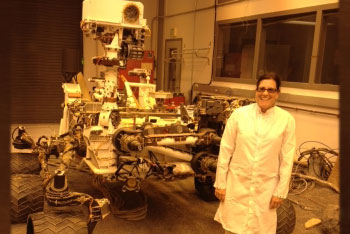 Senior NASA Mars scientist Dr Jen Blank is a member of Curiosity's Science Team and an astrobiologist working at the NASA Ames Research Center located in the heart of Silicon Valley.

Over 300 Cantabrians, who were quick enough to snap up free tickets, will be able to see Martian scenery and learn about NASA rover Curiosity's most interesting discoveries along its traverse from the landing site toward the central resurgent dome, Mount Sharp, from senior NASA Mars scientist Dr Jen Blank at her upcoming UC Connect public lecture.

The most recent rover to arrive on Mars, NASA's Curiosity rover has been exploring an ancient impact crater on the red planet for almost four years. NASA scientist Dr Blank is a member of Curiosity's Science Team and has operational roles as the science payload upload and downlink lead for ChemCam, the instrument suite on the rover that includes the first interplanetary laser.

Dr Blank is an astrobiologist working at the NASA Ames Research Center located in the heart of Silicon Valley. Trained as a geochemist and experimental petrologist, she has expertise in chemical and thermodynamical analysis of fluids and rocks, and petrographic and geochemical analysis of rocks and minerals. She has designed and conducted fundamental experiments to determine solubilities of volatiles (carbon dioxide and water) in magmas as well as the partitioning of carbon isotopes between gas and melt phases in igneous systems.

Dr Blank is a regular review panellist for NASA’s Science Mission Directorate Research Program that funds NASA-sponsored astrobiology, planetary, and space science research. She is a technical advisor to the NASA Astrobiology Institute headquarters, situated at NASA Ames, and a member of NASA’s “Methane on Mars” working group.

Dr Blank has participated in the NASA-inspired educational program, Spaceward Bound, in the Pillbara (Australia) and the Taupo Volcanic Zone (New Zealand’s inaugural expedition) and served as Chief Scientist and First Officer for the Mars Desert Research Station Rotation 123. She has mentored undergraduate and graduate students and teaches an annual field course, Fundamentals of Geothermal Systems (in Nevados de Chillán, Central Andes, Chile) for the University of Chile Geology Department. She has co-authored more than 40 journal publications and more than 100 conference abstracts and presentations.

Those who missed out on tickets will be able to watch the lecture on UC Connect’s YouTube channel a week after the lecture.

UC Connect public lecture: Curiosity on Mars - The adventures of a planetary rover, senior NASA Mars scientist Dr Jen Blank, Monday 16 May at the Ilam campus of the University of Canterbury.