UC researchers have discovered a very unusual chemical system that breaks the chemical 'rules of attraction'. 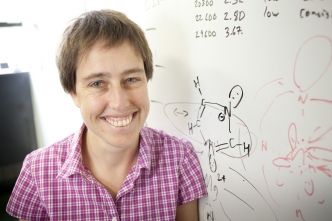 UC Chemistry senior lecturer Dr Deborah Crittenden says this unusual observation has led to a deeper and richer understanding of how molecules behave and interact.

Researchers at the University of Canterbury have discovered a very unusual chemical system that breaks the chemical 'rules of attraction', in which two positively charged molecules form a closely bound sandwich complex. So they set out to investigate: how can this happen? Do we need to rewrite the textbooks?

One of the core rules of chemistry is that opposites attract. In the same way that magnets repel if aligned with north poles facing, but attract when aligned north-to-south, molecules typically attract one another if they are oppositely charged, while molecules with like charges repel.

The academic paper about this odd behaviour that defies the rules, Cyclopropenium Cations Break the Rules of Attraction to Form Closely Bound Dimers, written by Andrew J. Wallace, Chaminda D. Jayasinghe, Matthew I. J. Polson, Owen J. Curnow, and Deborah L. Crittenden of UC’s Department of Chemistry, College of Science, was recently published in the prestigious Journal of the American Chemical Society (JACS).

The UC researchers discovered a number of factors are responsible for this seemingly odd behaviour that broke this core rule, according to Chemistry senior lecturer Dr Deborah Crittenden:

“Overall, this unusual observation has led to a deeper and richer understanding of how molecules behave and interact, and shows the limitations of blindly applying the simple 'rules' of attraction presented in textbooks,” Dr Crittenden says.