UC Professor Robert R. Jackson and his productive and successful career in arachnology is being honoured in a special edition of The New Zealand Journal of Zoology. 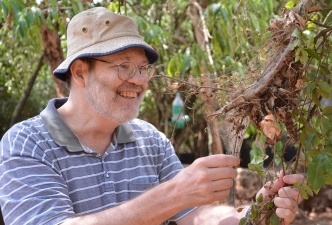 University of Canterbury Professor Robert R. Jackson and his productive and successful career in arachnology is being honoured in a special edition of The New Zealand Journal of Zoology.

University of Canterbury Professor Robert R. Jackson and his productive and successful career in arachnology is being honoured in a special edition of The New Zealand Journal of Zoology.

The University of Canterbury Professor of Animal Behaviour has a long association with the New Zealand Journal of Zoology and has published more than 250 peer-reviewed journal articles as well as numerous book chapters throughout his career.

Prof Jackson was fascinated by spiders from an early age which later inspired his dedicated, insightful research. He has helped to challenge the notion that complex, flexible behaviour can only be found in big-brained animals, says Dr Fiona Cross, Animal Behaviour Postdoctoral Fellow at UC’s School of Biological Sciences, who guest edited the special issue of the scientific journal along with Dr Cor Vink of Canterbury Museum.

“Whoever would have thought that a salticid (Portia fimbriata) from rainforests in Queensland, Australia, deceives its prey and makes plans for capturing its prey, or that a small salticid (Evarcha culicivora) from East Africa prefers eating blood-carrying mosquitoes? Thanks to the work of Robert and his colleagues, we now understand that these spiders are wonderfully complex creatures, not mindless automatons,” says Dr Cross.

Prof Jackson is also known for his generosity in training scientists and he has supervised many PhD, MSc and BSc Honours students since arriving at the University of Canterbury in 1978. Five of his former PhD students are authors in this Festschrift (a collection of writings published in honour of a scholar): Simon Pollard, Ximena Nelson, Phillip Taylor, Fiona Cross and Mary Whitehouse.

The articles published in this Festschrift, written by some of Prof Jackson’s many colleagues and friends, reflect the numerous ways in which his insights have influenced the work of arachnologists around the world.

The Festchrift features behavioural studies as well as descriptions of spiders from New Zealand and further afield. This includes species from the Australian salticid genus Jacksonoides, originally named in honour of Prof Jackson and his outstanding work on Salticidae behaviour.

“We thank Robert for his infectious enthusiasm and we hope that the papers in this issue will help to continue interest and research in the biology and behaviour of spiders,” says Dr Cross.