Could the next Pokemon Go phenomenon come from Canterbury? It nearly did. UC Professor Rob Lindeman of the HIT Lab NZ discusses the background behind the hype. 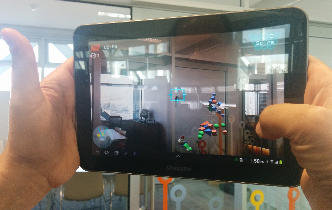 At UC, the HIT Lab NZ's early foray into AR gaming was a 2011/2012 project called GeoBoids, where players could run around and catch geometric creatures from another dimension using their Android devices, says Professor Rob Lindeman.

Could the next Pokemon Go phenomenon come from Canterbury? It nearly did. PROFESSOR ROB LINDEMAN of the Human Interface Technology Laboratory (HIT Lab NZ) at the University of Canterbury, which has been working on the cutting edge of Augmented Reality, Virtual Reality and related technologies since 2002, discusses the background behind the hype.

The release of Pokemon Go has been huge, generating incredible buzz from many different sources worldwide. For people in the Augmented Reality (AR) research community, the hype has produced reactions spanning the range, from ‘Finally, a mainstream AR hit!’ to ‘Hmmm, there’s nothing new about it that wasn’t done 10 years ago’ to ‘Well, that’s not really AR’.

The Human Interface Technology Laboratory New Zealand (HIT Lab NZ) at the University of Canterbury has been working on the cutting edge of AR, VR, and related technologies since 2002, with several present and past staff members having more than 20 years of experience working in this research space. So to us, it is great to see an AR hit like this, though it really is nothing new from a technology point of view, and it is certainly a form of AR.

Ron Azuma, in his seminal survey paper on AR (Azuma, 1997), defines AR systems as those that have each of the following three characteristics:

Using this accepted definition, at least one mode of playing Pokemon Go satisfies these conditions.
But beyond the question of whether it is AR or not, Pokemon Go has at least provided a rallying point for the general public to better understand what AR is. This is no small feat, since large organisations have tended to shy away from using the term AR in favor of other, less clear tags, such as Microsoft referring to “holographic apps” for software designed for its HoloLens product instead of using a term like “AR apps.” Since HoloLens does not actually use holography, “AR apps” seems like a more appropriate (and precise) choice.

The “newness” factor is also interesting to explore. Several AR games have been created before, though mostly by AR research labs. Around 1999-2000, the Wearable Computer Lab at the University of South Australia created ARQuake, an AR version of the popular FPS game Quake, where players could run around outside killing baddies (ARQuake, 2002). Yes, the “wearable” systems back then were much larger, but the idea and implementation were there.

Other examples also exist. At the HIT Lab NZ, our own foray into AR gaming was a project from 2011/2012 called GeoBoids (Lindeman, 2012), where players could run around and catch geometric creatures from another dimension using their Android phones. At the time, we even discussed how this idea could really take off if we could secure some popular intellectual property (IP), such as Pokemon. Soon after, Niantic’s predecessor to Pokemon Go, called Ingress, was released (Ingress, 2012), and spawned a huge number of players. This game split players up into two factions, each with the agenda of securing as much of the Earth as possible, in order to embrace (green) or thwart (blue) an “invasion” of alien matter on the Earth. Players had to visit specific sites to capture them for their faction, and coordinate with others to capture larger swaths.

Of all the differences between Ingress and Pokemon Go, the most important in terms of explaining the popularity of Pokemon Go is undoubtedly the intellectual property (IP). As with many existing products, a heavy dose of popular culture can bring huge success, as evidenced by, for example, the explosion in popularity of Lego once it started to offer IP-themed sets like Star Wars and Indiana Jones in the early-to-mid 2000s.

The lesson is that, ultimately, content is king - at least when it comes to entertainment applications. A technology is just a solution looking for a problem when it is devoid of first-rate content, careful consideration of the target-user population and solid delivery of a polished goods, all tied together by careful experience design. Since this is the focus and philosophy of the HIT Lab NZ, we look forward to excellent things to come, and to riding the wave of interest that has been created by Pokemon Go.