A UC study suggests that synaesthesia does not make you more or less creative, however, a teacher's understanding of synaesthesia could enhance how they teach the arts. 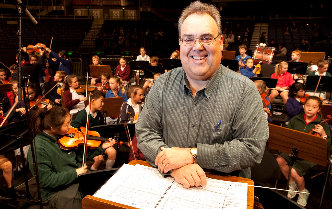 While his study explores synaesthesia in its broadest sense, participants were asked to comment on any ways their learning might have been enriched by their synaesthesia, says UC academic Dr Patrick Shepherd.

An ongoing study by Senior Lecturer Dr Patrick Shepherd in the University of Canterbury’s College of Education, Health and Human Development suggests that synaesthesia does not make you more or less creative. However, a teacher’s understanding of synaesthesia could enhance how they teach music, the arts and other subjects.

Synaesthesia often manifests itself as hearing colours (audition colorée or chromesthesia), tasting sounds, or attributing colours to words and numbers. In 2010 Dr Shepherd launched the first part of a study talking with synaesthetes about their condition.

In the project’s second stage he examined the specifically musical manifestations of synaesthesia in the 11 synaesthetes taking part in the study, as well as relating his findings to other interesting manifestations of the phenomenon.

Talking with synaesthetes about their experience rather than testing them was an important aspect of his study. Initial findings were presented at two conferences in Australia in 2011 and 2013. Both stages of his research won UC Summer Scholarships, the first focusing on interviewing the synaesthetes and gathering data, the second working on a website, Synaesthesia Aotearoa, which is currently being updated.

While the study explores synaesthesia in its broadest sense, participants were specifically asked to comment on any ways in which their own learning might have been enriched by their synaesthesia, says Dr Shepherd. They were asked if they felt it made them more or less creative and any ways in which synaesthesia, as they perceive it, might be used in education, particularly with regard to music and the arts.

“Analysis of their responses indicate that having synaesthesia does not make you more or less creative, and those who have it will just as equally use their synaesthesia in their work as not – it is not a determining factor as to someone’s ability to be creative.

“However, it is possible that synaesthetes might use the condition as a positive tool in the teaching of the arts.”

“Synaesthesia affects people in very different and usually very inconsistent ways, colour hearing does not automatically come with taste association; combinations are not universal nor are they similar. Synaesthesia can equally be a help or a hindrance – there is no evidence to suggest that it makes you any more or less creative.

“But knowing somebody with a similar view of the world helps by normalising the condition. Being aware of synaesthesia is important for educators and non-synaesthetes, as well as using colour analogy as part of a dialogue with the students about the way they perceive their world.”

He says the theory of synaesthetics, the artistic application of synaesthesia to make connections within the Arts disciplines, clearly underpins the theory of Integrated Arts, though is only ever implicit. However, recent studies show that synaesthetes, those who are clinically diagnosed as having the condition, may number as high as one in 23.

“So many of our children are synaesthetes but may hide the fact, in worst cases regarding it as an affliction, when in actual fact it could be used as a positive tool in the teaching of the arts.

Coincidentally, that number is similar to the incidence of dyslexia and that condition often accompanies synaesthesia.”

Dr Shepherd says that the next stage of this study needs to focus on children.

“In talking with colleagues overseas it has been strongly suggested that in my professional position as an educator working with primary age school children, and in my role as a university researcher, my studies should focus on young children as that is where the condition is most prevalent.”

Fact file:
• Synaesthesia is a condition whereby people “have anomalous perceptual experiences that are triggered by activity in another sensory modality” (Ward et al, 2008).
• It often manifests itself as hearing colours or tasting sounds, or attributing colours to words and numbers, and is a condition experienced by many famous creative people e.g. painter and art theorist Wassily Kandinsky, composer Olivier Messiaen, composer Alexander Scriabin and artist David Hockney.

Dr Patrick Shepherd is the coordinator for the two undergraduate and graduate arts-based courses in Primary Education at the College of Education, Health and Human Development, and is an accomplished composer, conductor, performer and teacher. He is passionate about new music, music education, technology and creativity. He is also the Music Director of the Christchurch Schools’ Music Festival which involves over 4000 primary school children in its performances each year.