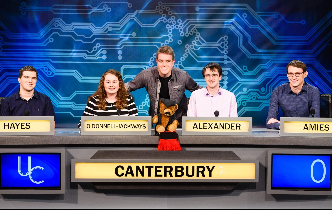 A team of University of Canterbury students is using education, experience and exceptional brain power in the quest to retake New Zealand academia's top trivia title in the TV quiz show University Challenge.

A PhD student in Chemistry, UC captain Stewart Alexander also competed in the relaunched Mastermind TV quiz show earlier this year and says the team has been working hard to prepare for the challenge.

“With months of practice and a wide knowledge base we’re aiming to take out the competition again,” he says.

The UC team has a range of expertise including engineering, history, political science, law, geography, sport, pop culture, history of science and chemistry.

UC has performed well in the first two series of the relaunched University Challenge, winning the 2013-14 contest (Boardman and Alexander are veterans of that win) and reaching the final last time. The UC team is again performing well in the current 2016-17 series, recently beating AUT and Lincoln.

Filming took place in August meaning students have had to keep the results of the quiz under wraps for months. It’s currently screening on Prime, Saturdays at 6pm (catch up on UC episodes here).

Based on a British version, University Challenge is an academic quiz show where teams of university students answer questions on a wide range of subjects. The show, which first screened in New Zealand in 1976, returned in 2014 after a 25-year hiatus, with the University of Canterbury team claiming the title in the first new series.