A seminar being held at the University of Canterbury tomorrow, called Women Behind The Law, will be an opportunity to shine a light on "invisible women". 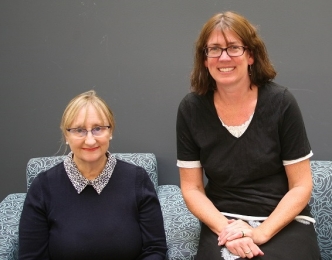 Chair of the College of Business and Law's Equity and Diversity Committee, Associate Professor Colleen Mills (left), and Senior Law Lecturer Dr Natalie Baird will take part in a seminar, Women Behind The Law, at the University of Canteerbury.

A seminar being held at the University of Canterbury tomorrow, called Women Behind The Law, will be an opportunity to shine a light on “invisible women”.

UC School of Law senior lecturer Natalie Baird says she organised the event because, although 2016 saw an equal number of men and women as lawyers for the first time, there is still a large seniority gap and pay gap.

“Women are under represented in the judiciary; as partners in firms, as MPs and in academia. So by looking at the women behind significant cases, as victims, plaintiffs and in one case a defendant, we can honour the women who have influenced the development of the law in New Zealand,” she says.

Women Behind The Law will see a panel of UC law academics discuss cases such as Lower Hutt aged care worker Kristine Bartlett, who took her case to the Court of Appeal arguing her close to minimum wage hourly rate was a breach of the 1972 Equal Pay Act as it was less than what would be paid to men with the same skills.

The seminar is part of ongoing UC efforts to promote and discuss diversity.

Associate Professor Colleen Mills, Chair of the College of Business and Law’s Equity and Diversity Committee says the Women Behind The Law event will be “a real eye opener” for the audience.