UC SVA's Serve for NZ concept encouraging people to do meaningful acts of service on days of national significance has royal support. 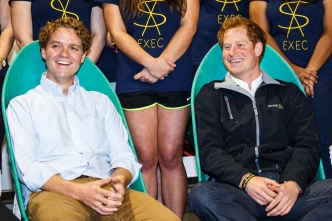 The University of Canterbury's Student Volunteer Army (SVA) Serve for New Zealand concept encouraging people to do meaningful acts of service on days of national significance has won support from a key British Royal.

His Royal Highness Prince Harry this week endorsed the initiative, which challenges New Zealanders to undertake some form of volunteering or neighbourly service in the lead up to or on Anzac Day 2016. The project coincides this year with the RNZRSA’s (Royal New Zealand Returned and Services’ Association) centenary.

The Serve for New Zealand concept originated following a discussion between Prince Harry and the SVA during the Prince’s visit to the University of Canterbury last year.

“When I visited New Zealand in May 2015, I was delighted to have the opportunity to spend time with the Student Volunteer Army in Christchurch, and to meet with veterans in Whanganui,” says Prince Harry.

“I was particularly struck by that fact that, although very different in some respects, both groups shared a tremendous spirit of service and connection with their communities. I am so pleased to see that this bond is being recognised through a new partnership between the SVA and the RNZRSA.

“This initiative is a way for Kiwis to remember the service of others in the past, and to continue that tradition of generosity and sacrifice in a practical way. I would like to congratulate those who have already pledged their time, and encourage others to do the same.”

So far more than 4000 New Zealanders, including Members of Parliament and Ministers, have signed up to the campaign and committed to undertake an act of meaningful service – either in the lead up to or on Anzac Day, marked on 25 April.

Prince Harry is a strong supporter of international grassroots projects. Following his official tour to Nepal in April this year he joined a team of military veterans volunteering to help the people of a remote village whose community had been destroyed by the 2015 Nepal earthquake.

SVA founder Sam Johnson says the international support from Prince Harry and his family to Christchurch following the earthquakes has ensured movements like the Student Volunteer Army continue to have a positive impact.

“During his visit, Prince Harry emphasised the importance of sharing the lessons we have learned from Christchurch and other disasters, such as Nepal, and to look at how to grow the movement to support and involve more people.”

Serve for New Zealand is grounded in the core of the lessons from the earthquakes in Christchurch. It shines a light on days of national significance and strives to bring more meaning to them.

“It is about coming together to do good, not just as a community but as a nation,” says Johnson, who is an Adjunct Fellow of the University of Canterbury.

Vice Chancellor of the University of Canterbury Dr Rod Carr agrees and notes the wide-reaching legacy of the SVA.

“The Student Volunteer Army showed the world the very best of University of Canterbury students after the Canterbury earthquakes and it has endured, establishing an ethos of community services that has become part of UC’s graduate profile,” Carr says.

The impact of Serve for New Zealand is already being felt in communities throughout the country, with various schools and organisations pledging their time. An army of 206 students and 12 teachers from Omokoroa Point School in the Bay of Plenty spent an hour collecting rubbish and cleaning up their local peninsula this week – just one example of the many grassroots movements that have been inspired by the campaign. Students from Limehills School in Southland gave a new lease of life to the Limehills War Memorial.

“We are striving to help younger and older people work together, and for the Student Army, and other such groups around the world, to learn leadership skills from those with real life experiences. As we discussed with Prince Harry, there is huge value in young people learning leadership skills from veterans who are highly trained team players,” Johnson says.

The Serve for New Zealand project is hosted the by Volunter Army Foundation and in the future may focus on other days of national significance such as Women’s Suffrage/Kate Sheppard Memorial Day and a Parihaka Day.

Serve for New Zealand was first launched on the fifth anniversary of Canterbury’s biggest earthquake on 22 February 2011. Thousands of New Zealanders will take some time out on Anzac Day to give back to their community in some way. A website – www.servefor.nz – has been set up for people to pledge their intention to contribute. So far the site has seen pledges from more than 4000 people ahead of Anzac Day.

The founding partners of Serve for New Zealand, the University of Canterbury, the RNZRSA and the SVA, hope to see the pledge initiative repeated in future.

To pledge to Serve for New Zealand: Anzac Day, register online at www.servefor.nz.