A UC student who is a practising pharmacist and self-confessed "public health fanatic" has been awarded the 2016 New Zealand Science Journalism Fellowship. 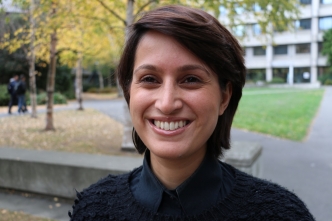 Meena Amso, who immigrated with her family to New Zealand from Iraq aged 14, is part of the Postgraduate Diploma in Journalism programme at the University of Canterbury. A practising pharmacist, she has been awarded the 2016 New Zealand Science Journalism Fellowship.

A University of Canterbury student who is a practising pharmacist and self-confessed “public health fanatic” has been awarded the 2016 New Zealand Science Journalism Fellowship.

Meena Amso, who immigrated with her family to New Zealand from Iraq aged 14, is part of the Postgraduate Diploma in Journalism programme at the University of Canterbury.

After several years working in pharmacies, she began interning at a radio and television station in Auckland and developing her own documentary, In the Deep, about a life-changing trip to Tonga. Her move into journalism was in part inspired by an interview with American celebrity talk-show host and media mogul Oprah Winfrey.

“She talked about how she used her show to bring about change in the world,” says Amso.

“I want to do the same. To be a broadcast journalist and use stories to connect people to higher ideas and to raise the level of consciousness on issues.”

Amso followed her Bachelor of Pharmacy degree with a Postgraduate Diploma in Public Health, before applying for UC’s prestigious journalism programme.

“I am interested in maintaining a good sense of wellbeing, in what makes us healthy, beyond biology and physical anatomy - so things like good housing, clean drinking water and good relationships.

“I realised that my place to make a difference was going to be outside the four walls of pharmacy and in the newsroom where I could chase stories and talk to people who are in a position to influence policy and drive change.

“I love the notion of getting out and interviewing people, publishing stories, having a television talk show and engaging people at home with pressing issues in our time. It is also just a matter of time before I use what I know in pharmacy in what I do in the newsroom.”

Amso will undertake internships with media outlets during the year and receive mentoring and support from the Science Media Centre staff and advisors. The Fellowship also includes a $2,000 contribution towards her academic fees.

The New Zealand Science Journalism Fellowship is offered by the Science Media Centre with funding from the Association of Scientific and Technical Communicators (NZ) and is aimed at assisting candidates with a science background pursue a career in journalism.