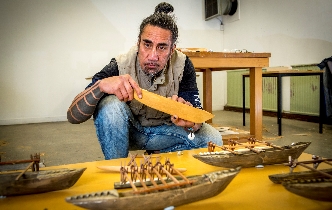 New Zealand-Samoan artist Ioane Ioane has used his residency at the University of Canterbury's Macmillan Brown Centre for Pacific Studies to take another step toward relearning the lost art of building traditional Samoan va 'a (canoe).

While the art of boat-building was once central to the Pacific, few intact vessels remain. New Zealand-Samoan artist Ioane Ioane has taken up the challenge, with his residency at the University of Canterbury’s Macmillan Brown Centre for Pacific Studies allowing him to take another step toward his goal of relearning the lost art of building traditional Samoan va ‘a (canoe).

Ioane has focused on researching and carving maquettes which will culminate in a fully functional sea-faring va’alo (fishing canoe) to be showcased as part of the prestigious Headland Sculpture on The Gulf on Waiheke Island in 2017.

Ioane’s va ‘alo maquettes are pieced together from archival images, books and word-of-mouth passed on through generations.

In May Ioane represented New Zealand at the 12th South Pacific Arts Festival in Guam where he heard from expert canoe makers from all over the Pacific.

“I’ve carved these maquettes through listening to these experts and my research at the MacMillan Brown library. It’s helped me understand deeper the cosmology that links our ancient navigators to the ocean, stars and the Va (space between) that binds all,” Ioane says.

“The Pacific came to be the Pacific through canoes – as a mode of transport and survival they connected everything; people, culture, language and food. Nowadays we have the internet; in those days they were the internet, spreading the first wave of globalisation.”

Ioane says he is part of a wave of Pacific artists reviving the art.

“When Europeans arrived in the Pacific they were blown away by how many boats we had and how sophisticated our boats and navigation were. Much of that was kept secret by European historians because it didn’t fit with Western perceptions of Pacific people at the time. That’s why we are doing this – I’m just a little fish, there are many of us reviving an ancient yet cutting edge artform.”

The Macmillan Brown Pacific Artist in Residence programme has been offered annually at UC since 1996. The residency aims to provide the chosen artist with an opportunity to develop new directions in their artistic practice and to support and promote the development of indigenous Pacific Art in New Zealand.

Curated by Lydia Baxendell, the exhibition runs until 7 October at the Matariki building, Ilam campus, University of Canterbury.