New windows on the Universe 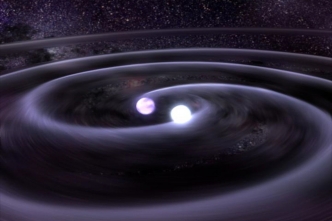 As researchers with the Laser Interferometer Gravitational-Wave Observatory (LIGO) announce they have spotted gravitational waves – ripples in space itself set off by violent astrophysical events – University of Canterbury Professor of Physics Dr David Wiltshire discusses what it means.

The announcement that gravitational waves have been directly captured for the first time ever, from the collision of two black holes, opens a new age of astronomy. From now on we will be able to "listen" to the Universe with "ears" that are not limited by the electromagnetic spectrum, completely changing our understanding. It is a moment in history every bit as important as when Galileo first pointed his telescope at the stars and planets, or when the first radio, X-ray, infrared or gamma ray telescopes were first turned on by 20th century astronomers.

It is also a story of many human triumphs. For Albert Einstein, whose theory of general relativity first predicted gravitational waves exactly 100 years ago, it is a triumph. For New Zealander Roy Kerr, who found the solution of Einstein's equations which describes rotating black holes, but had to struggle to be listened to by astronomers on announcing his result in a 10-minute conference talk in 1963, it is a triumph. For the numerical relativists, such as Frans Pretorius at Princeton who in 2005 solved a decades-long struggle of how to split space and time in Einstein's equations on a computer, to determine how gravitational waves are produced when black holes collide, it is a triumph.

And above all, for the hundreds, the thousands of ingenious and skilled experimental physicists who have struggled with their lasers, mirrors and suspensions for decades to make the most sensitive measurements ever achieved by humankind, it is a triumph. We have now made a measurement so sensitive it’s like measuring the width of a human hair at the distance of Alpha Centauri.

What will we discover? Most exciting are the unknown unknowns. But the known unknowns include most of the black holes in the Universe.

By definition a black hole is an object so dense that nothing can escape, not even light. That makes them often impossible to detect. In the centres of all galaxies there are supermassive black holes. The one in our own Milky Way weighs in at 4.3 million solar masses, and is so close that we can work out its mass by observing the orbits of nearby stars.

In distant galaxies we cannot resolve individual stars. But when the Universe was younger and full of gas, there was a lot more material available to fall into and create the huge black holes in galactic centres. This stuff formed accretion disks of material swirling in, and huge jets of energetic charged particles accelerated by magnetic fields from the poles of the rotating black holes. These form quasars, the most energetic and violent phenomena since the Big Bang.

Everything we know about black holes comes from observing accretion disks around supermassive ones. It is for this that Roy Kerr of the University of Canterbury and Roger Blandford of Stanford University share this year's Crafoord Prize in Astronomy from the Royal Swedish Academy of Sciences.

Every galaxy in the Universe has only one supermassive black hole in the centre, but many millions of smaller black holes about which we know almost nothing - until now.

Most black holes we will never detect, but a small fraction of them - like the ones just observed - come in pairs. These orbit each other for hundreds of millions of years, before spiralling in and merging into a single rotating black hole whose surface wobbles like a bell, radiating copious gravitational waves in the process - a whole three suns worth of energy in the event just detected. In the final fleeting seconds of merger and ringdown black holes' secrets are revealed. This is the most spectacular direct observation of the existence of rotating black holes ever.

Some people ask: what such measurements are good for? Actually, they provide a laboratory that is impossible to create on Earth. In addition to learning about black holes, once we catch two neutron stars colliding, or a neutron star and a black hole, we will discover heaps about the properties of nuclear matter at high density from the gravitational waves produced. There are big gaps in our knowledge there. Until we actually understand the fundamental physics, it is impossible to know what we might ultimately do with it.

In a world that is struggling with war, climate change and the limits of finite resources, the money put into big science projects like LIGO is often questioned. But satisfying human curiosity, to understand the Universe and our place in it is what makes us human in the first place, regardless of what we might do with the knowledge we gain.

Furthermore, big science teaches us to solve big problems by working as teams spread across the globe. Each group of researchers has their own culture, and barriers sometimes take years to break down. This project is vast in its complexity of human interactions: experimental physicists, engineers, mathematicians, numerical modellers, theoretical physicists and astronomers have all played roles which were each essential to its success. That surely has lessons not only for opening a new age of astronomy, but also for ultimately solving the many big problems we have created on this planet.