A scarcely known perspective challenging conventional versions of the start of the West Coast gold rushes has been published in a new book by Canterbury University Press. 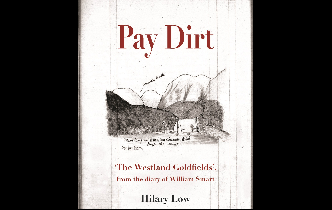 Pay Dirt by author Hilary Low draws on the illustrated memoir of William Smart, a gold prospector on the West Coast during the early 1860s when the region still belonged to Canterbury.

A scarcely known perspective challenging conventional versions of the start of the West Coast gold rushes has been published in a new book by Canterbury University Press.

Pay Dirt: ‘The Westland Goldfields’, from the diary of William Smart by author Hilary Low draws on the illustrated memoir of William Smart, a gold prospector on the West Coast during the early 1860s, when the region still belonged to Canterbury.

In his memoir, Mr Smart provides an account of how he missed out on the government’s gold reward, offered to whoever discovered a payable goldfield in the province – an account that Ms Low’s research suggests is closer to the truth.

“In 1864, Smart and his mate Michael French were prospecting at Greenstone Creek and discovered signs of a rich goldfield. They applied for the reward and to prove their claim they organised a rush to the site – the first in the region.

“However, another prospector Albert Hunt claimed the credit for it. He applied for the reward, and through his deceit and intensive lobbying he eventually won.

“Smart was furious, but his bids to be heard fell on deaf ears. Once Hunt had secured the reward, no-one listened to Smart. To set the record straight Smart wrote his memoir, 'The Westland Goldfields', but he died without it seeing the light of day.”

By winning the gold reward, Mr Hunt’s 'discovery' was made official. This version of events made it into the history books, reinforced by his name on a bronze plaque that still stands beside the Greenstone River.

As well as offering an alternative perspective of a key historical milestone on the West Coast, Ms Low says Pay Dirt offers a snapshot of life during a defining period in Canterbury’s history.

“The joy of Smart’s memoir, and incidental to his purpose, is his evocative picture of the Coast before it was overwhelmed by the gold rushes. He recorded in detail a prospector's life on the diggings and on the trail, and especially his close association with Poutini Ngāi Tahu of Māwhera pā at the mouth of the Grey River.

“In Pay Dirt I describe how Māori brought gold mining from Golden Bay down the coast to the Māwhera district before Pākehā prospectors arrived – which is documented but not well known. While Māori established the first diggings in the area, Smart and French were first to identify and prove there was a major goldfield at Greenstone Creek, triggering the first of the West Coast gold rushes.”

Previously unpublished, William Smart’s memoir now exists only on microfilm in the Macmillan Brown Library at the University of Canterbury. Pay Dirt presents for the first time his written account, and all of his pen-and-wash drawings.

Hilary Low lives in Wellington. She has a BA in English literature and a post-graduate Diploma of Librarianship from Victoria University.  Her first book, Pushing His Luck, about the 1863 expedition across the Southern Alps by Henry Whitcombe and Jakob Lauper, was published by Canterbury University Press in 2010.