Mystery whales put on show at Scott Base 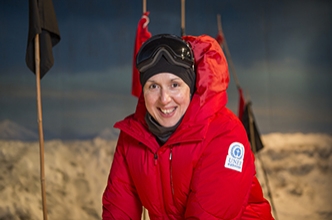 Yesterday (9 March), a group of nine large whales appeared at Scott Base. The whales put on an exuberant display, tail-slapping, breaching, and leaping clear out of the water. The rare sighting was made possible by the sea ice breaking out, something which happens every few years in McMurdo Sound, creating panoramic views of the open ocean.

Antarctica New Zealand Winter Leader Andy Waters and Construction Site Manager Karl Johnson who are stationed at New Zealand’s Antarctic research base, happened to be outside with their cameras ready.

The whales came up at the southern end of McMurdo Sound, right against the edge of the Ross ice shelf. They stayed in the area for about half an hour, and then disappeared as suddenly as they had come.

A hot debate ensued at Scott Base as to the identity of the whales. To resolve this, pictures were sent to UC Antarctic marine mammal expert Dr Regina Eisert who immediately recognised that the whales were not minke whales, but something much more exotic – beaked whales.

“Based on their appearance and the location, these are probably Arnoux beaked whales (Berardius arnuxii).  Beaked whales are the ‘mystery’ whales and sightings are few and far between. It’s very exciting to have them show up right outside Scott Base.”

Beaked whales are classified as toothed whales (like killer whales and sperm whales). Arnoux beaked whales occur throughout the South Pacific and Southern Ocean including New Zealand waters.  They grow up to 9.75 metres long.

“This is a very special, scientifically significant sighting. People just normally don’t get to see them.  The question is, are the whales just being nosy or are they searching for new feeding grounds? If they do visit this area then in future, we may be able to study them in this ecosystem, which would be a fantastic research opportunity.”

Fact file: Dr Eisert joined UC’s Gateway Antarctica in June 2013 to develop a new research programme on megafauna (seals, whales, and penguins) in the Ross Sea. Her expertise is in the physiology and nutritional ecology of Antarctic marine mammals (seals and killer whales). Before coming to UC she completed a PhD on the energetics of lactation in Antarctic Weddell seals at Lincoln University and worked as a postdoctoral researcher at the Smithsonian Institution in Washington, DC.