An outstanding Māori UC student teacher has been awarded a Kupe Scholarship for providing a role model of success in education, it was announced in Parliament this week. 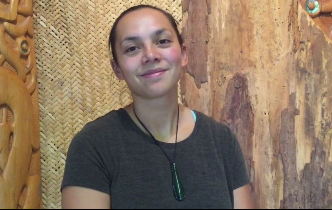 An outstanding University of Canterbury Māori student teacher has been awarded a Kupe Scholarship for providing a strong role model of success in education, it was announced in Parliament this week.

Due to graduate at the end of the year, Desma is excited about completing her journey at UC, noting the support of her lecturers and fellow students as instrumental to her success.

“Now that it’s coming to an end, all the pieces are coming together. It’s nice to see all your hard work being recognised. It’s challenging, like any study is, but I’ve enjoyed the whole journey and I love the whānau atmosphere we create at the UC Rotorua campus. That’s contributed a lot to my success.”

Desma has a history of achievement, having received a Rotorua Young Achiever Award in 2011 for outstanding leadership in school and community while she was at Western Heights High School.

The University of Canterbury Vice-Chancellor Dr Rod Carr invited Desma to join an international society for high-achieving students during her second year of the Bachelor of Teaching and Learning (Primary) programme. Away from the classroom, the sports field is Desma's second home, having played and refereed touch rugby and netball. As well as being a full-time UC student she is the mother of a preschooler.

The Kupe Scholarship aims to attract young, highly-talented Māori and Pasifika to the teaching profession and to help them become inspiring teachers and role models. The successful scholars were chosen from a large number of applicants nationally, through a rigorous selection process.

Education Minister Hekia Parata announced the awards in a ceremony held in Parliament on Monday 25 July.

Each year 30 Kupe Scholarships are awarded to students based on strong academic success and demonstrable leadership experience in their respective whānau, communities, and iwi.

The Kupe Scholarships fund course fees and study allowances, and offer professional mentoring and recruitment support after graduation. The scholars also receive taonga keepsakes in the form of a stylised paddle ‘hoe’ or waka/vaka/va’a as a permanent recognition of their achievements.