A University of Canterbury student has identified that our shores have high concentrations of microplastics. 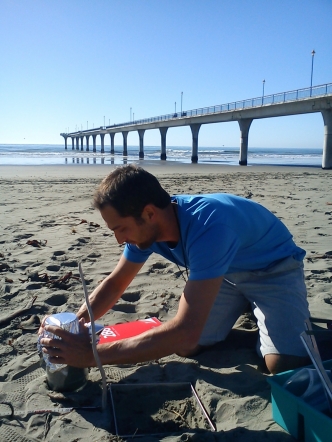 University of Canterbury PhD student Phil Clunies-Ross says, "This study has shown us that even though we are geographically isolated in New Zealand, we certainly are not free of microplastic pollution."

In the first dedicated study to investigate the quantities and types of microplastics in New Zealand coastal environments, a University of Canterbury student has identified that our shores have comparable concentrations of microplastics to overseas.

The recently published study indicated the highest concentrations of plastics were measured on exposed beaches close to urban areas.

University of Canterbury (UC) PhD student Phil Clunies-Ross undertook the research while completing his BSC (Hons) degree, with the study published this month in the New Zealand Journal of Marine and Freshwater Research.

“This study has shown us that even though we are geographically isolated in New Zealand, we certainly are not free of microplastic pollution,” Clunies-Ross says.

UC Senior Lecturer in Environmental Chemistry Dr Sally Gaw supervised the research project, which is the first to investigate the presence of secondary microplastics in New Zealand and involved a survey of different coastal environments around Christchurch. It has been predicted that as much as 10% of all plastic manufactured each year is ending up in the oceans, she says.

“Plastics are used widely due to their properties. Appropriate use and disposal of plastics is important if we want to prevent microplastics accumulating in the oceans,” Dr Gaw says.

An international report has recently stated that there may be as much plastic, by weight, as fish in the ocean by 2050.  It is too difficult to remove plastics once they have been released into oceans, she says.

Microplastics are small plastic particles less than 5mm (~0.2 in) in size. They are formed from the breakdown of larger plastic debris in the environment. They may also be pre-made, such as the microbes that are used in common consumer products such as toothpaste and facial scrubs. The combination of these microplastic sources has resulted in the accumulation of microplastics in oceans and on coastlines worldwide.

Microplastics will not break down for a long time (years to decades). This is a problem as these little particles can look like food for the small animals at the base of the food chain. Species as small as plankton and as large as fish will ingest microplastics. This may cause damage by: reducing their intake of normal food; damaging their gut; and shifting into other cellular tissue where it may cause harm.

Microplastics can accumulate contaminants from water. The surface of the plastic can have concentrations of harmful pollutants (such as DDT and other persistent pollutants) up to one million times that found in the water. This can be transferred to ocean creatures once eaten, which may be transported higher up the food chain to humans.