Exploring space and STEM to save Earth

University of Canterbury students got a chance to pick the brains of one of the United States' most influential scientists, NASA Deputy Administrator Dr Dava Newman. 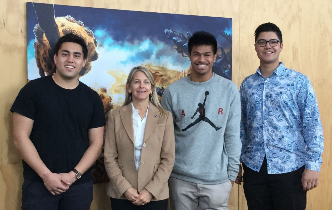 University of Canterbury students got a chance to pick the brains of one of the United States’ most influential scientists, NASA Deputy Administrator Dr Dava Newman.

Three University of Canterbury (UC) Pasifika students, alongside members of the United States Embassy Youth Council, got to meet Dr Newman as she visited Christchurch last month during a week-long tour of New Zealand.

Dr Newman, who is known for her extensive study and research on the development of space activity suits, shared her knowledge on issues such as supersonic rocket travel, sustainability in space and NASA’s current Mars mission.

The opportunity for the UC students to meet Dr Newman followed a recent Fono in Christchurch that promoted the study of Science, Technology, Engineering, and Maths (STEM) to Pasifika young people. As the students discovered, STEM – and the need for diversity in its study, are topics close to Dr Newman’s heart.

“STEM learning isn’t enough anymore. I use STEAMD – Science, Technology, Engineering, Arts, Maths and Diversity. We need all of these together to get to, and make the most of space. In the past people have tried to take the arts out of it, but NASA have always had artists and writers in space, as we are exploring off the earth, for the earth, so we want to give back.”

She says NASA is also working hard to increase diversity.

“I have this T-shirt I wear that says ‘Yes! I am a Rocket Scientist’. I wear it because it says that women can, and are leaders in this field. Wherever I go, it is really important to me that I share that message. It’s also really important this is built around a culture where we invest in tools to make it open to diversity.”

One way NASA has done this is through ‘citizen science’ projects where the public is encouraged to participate online. The latest rendition of this is Junocam, a high-powered camera pointed at Jupiter. People can vote, via NASA’s website, where the camera is pointed next.

Dr Newman also discussed how, even though there are so many players in space, the old competitiveness does not exist anymore.

“We are dependent on each other, so we get on and don’t let our differences get in the way. Everyone’s success is our success.”

She pointed to NASA’s funding of organisations such as New Zealand-based Rocket Lab, which is working on cheaper, lighter, more consistent and more environmentally conscious rockets. In the long term, such collaboration will help NASA concentrate its priorities.

“It will mean we can be the explorers and not have to work in the commercial sense.”

Third year UC Engineering student Wesley Mauafu, who is also a UC Pasifika leader, was inspired by the meeting.

“One thing I took away was Dr Newman’s idea on the best way to get more young people from minority groups into STEM subjects through helping them see that maths and physics are only the tools to do this work, and not the work itself.”

“This meeting will continue to give inspiration in all the work we do with Pasifika young people on and off campus.”

“The things Dr Newman has achieved in her life are beyond comprehension. Giving up her valuable time to talk with a bunch of youth from Christchurch just shows how much she believes in the next generation.”