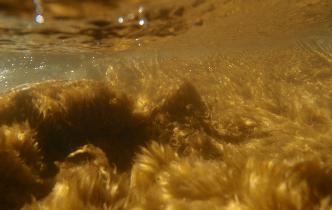 Commonly called ‘rock snot’, didymo, which was first identified in South Island rivers in 2004, has now spread to over 150 waterways throughout the island. In extreme cases it forms extensive thick mats (or blooms) which cover the entire bed of river, smothering the bed and changing the habitat. The algae, Didymosphenia geminata, has not yet been identified in the North Island.

Research by University of Canterbury (UC) ecologist Professor Jon Harding and NIWA scientist Dr Phil Jellyman shows that the invasive freshwater algae can have a significant impact on fish communities in rivers and streams.

Dr Jellyman, a UC alumnus who graduated from UC with a doctorate in freshwater ecology in 2011, and Prof Harding, of UC’s Freshwater Ecology Research Group (FERG), conducted the first extensive New Zealand study to robustly test the effect of didymo on fish.

They surveyed 20 South Island waterways and concluded that streams and rivers covered in didymo can still have numerous fish species, but the abundances and biomass (or size) of fish is changed markedly.

“The results of our study are of particular concern. We have assumed for some time that didymo will have an impact on fish, but these results show both native fish and introduced sports fish are all being affected by didymo,” Prof Harding says.

Most New Zealand freshwater fish feed on small insects and invertebrates that live on the riverbed. Fish, such as brown trout, commonly feed on small stream insects such as mayflies, stoneflies and caddisflies. However, these insects do very poorly in heavily didymo-infected rivers, according to the research.

“We showed that fish biomass in didmyo-affected rivers can be decreased by 70%, in particular brown trout were strongly affected. Thus rivers with didymo are liable to have much smaller trout and other fish, which could have major impacts on New Zealand’s sports fishery industry,” Prof Harding says.

“Trout had previously been recorded in all 20 rivers in this study but now were absent in 60% of the rivers with high didymo biomass. The consequences for our international trout fishery are obvious.”

The study emphasises the need to limit the spread of didymo to other rivers and for water users to adhere to the “check, clean, dry” procedures.

Prof Harding is a member of FERG, which is a large research group within the University of Canterbury’s School of Biological Sciences.

The research paper is available online at the journal Biological Invasions.