A University of Canterbury law student has been recognised as one of the most outstanding young people with a Cochlear implant in Australasia. 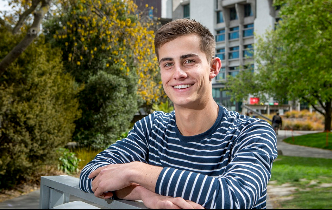 Born profoundly deaf, Lachlan Bartlett is now completing his first year of a double degree at the University of Canterbury and recently won the runner-up prize for the 2016 Cochlear Graeme Clark Scholarship for Australia and New Zealand to help fund his university studies.

A University of Canterbury law student has been recognised as one of the most outstanding young people with a Cochlear implant in Australasia.

Born profoundly deaf, Lachlan Bartlett received his implant at the age of eight. Now aged 19 and in his first year of a double degree at the University of Canterbury (UC), Lachie, as he prefers to be known, was recently awarded the runner-up prize for the 2016 Cochlear Graeme Clark Scholarship for Australia and New Zealand to help fund his university studies.

“I have been given so much help to overcome my deafness and in supporting my education, that there is a strong drive in me to give back to the community,” Lachie says.

“When I started my five-year double degree in Law and Criminal Justice at UC this year, I knew I would get what I need to make a difference, especially to people out there in the community who suffer from discrimination.”

Formerly head boy at St Bede’s College, Lachie says his favourite book, To Kill a Mockingbird, showed him just how unfairly some people are treated in society and what intolerance and prejudice can do and inspired his degree choice.

“I want to use criminal law to help those who have had their voice taken away from them, who are looked down on or don’t know how to ask for help.

“In law, there is an expectation that you will do a certain amount of community work, and that really suits me. UC Law has programmes that will enable me to find the sort of people I really want to help,” he says.

Passionate about his law and criminal justice studies, Lachie hopes one day to work as a Crown prosecutor, and eventually become a judge.

“I know it will take a lot of hard work, but I’m so prepared to put that in, and UC is opening up lots more opportunities to develop my leadership abilities and to give back to the community in a really positive way.”

In treating his deafness and his implant as gifts, Lachie has turned what some would see as a disability into a real advantage.

“With my implant in, I can hear as well as any other person, and interact naturally. But when I remove it, I get complete silence, something people with normal hearing probably never experience.”

“So I remove it to study, to do exams and even to read – any time I really need to focus. It gets me totally in my own world and limits all the distractions around me.”

“I would never let it hold me back, and I say the same thing to others with similar difficulties. Don’t use it as an excuse, but treat it as something that brings you opportunities and challenges you would never have had otherwise.”

“I’m certain that both Cochlear and UC will have a huge impact on where I end up in life, and it’s only natural that I would want to give back as much as I can in return.”

“I am proud to recognise this remarkable university student and reward him with this rare and prestigious accolade,” Professor Clark says.

“Like so many of our past award-winning recipients, Lachlan has overcome life-long challenges and has already achieved so much in his young life. I am excited to see what the future brings for this inspiring young man.”