The quick organisational skills of a group of University of Canterbury students and their families have seen a 20-foot shipping container filled with emergency supplies sent to Fiji. 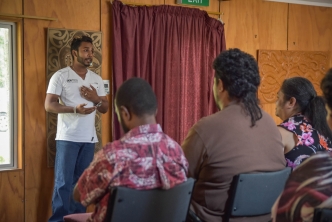 The quick organisational skills of a group of University of Canterbury students and their families have seen a 20-foot shipping container filled with emergency supplies sent to Fiji.

After his father Sunny Nambiar raised the idea, Nikheel Nambiar set about creating a fundraising and relief campaign for Fijians hit by the devastation of Cyclone Winston last month. The effort filled a shipping container with essential emergency supplies in just over a week.

“Reading the stories on Facebook and on news websites was really disturbing. We had never been to those places that had been so badly affected ourselves, as the areas of Fiji we are from were less affected, but the amount of devastation was really concerning. Straight away we started arranging things,” says Nambiar, who will graduate from UC in April with a Bachelor of Laws.

The campaign caught national attention after being picked up by The Press, and soon donations for the container were coming in from as far away as Hamilton.

“We managed to get a lot of attention and contributions. People have just been coming over continuously since we started the campaign,” says Nambiar

An estimated $80,000 in goods have been received – 250 pairs of safety boots, shoes, 3500 exercise books, two tonnes of canned food, one tonne of bottled water, two tonnes of baby supplies and household goods, milk powder, 300kgs of rice, and flour.

The container, donated by SB Logistics, was shipped last week, and will take at least two weeks to arrive in Fiji, where it will be received by the Crishna Mission Health Organisation in Lautoka.

With much more work to be done to assist those worst affected, the group is continuing their campaign, and have been buoyed by help from charitable Cantabrians, many of whom have had personal experience with natural-disaster response.

“After the first loading last Tuesday the Christchurch City Council has confirmed that they are willing to sponsor another two containers. We are waiting for the paperwork and then we set off for the next round of donations,” says Nambiar.

“The community has been great – the Pacific Development Team at UC was really helpful with spreading the word about the campaign, and also helping to organise a gathering of UC Fijian students to provide some assurance and comfort, where I was able to speak about the relief effort.”