A new book aims to educate social work students on how policy is influenced, examining political ideologies and media framing. 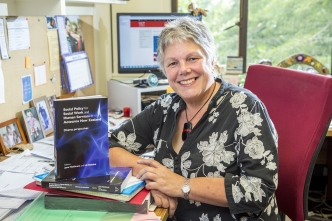 Associate Professor Jane Maidment from the University of Canterbury's Department of Human Services has a new book.

A new book aims to educate social work students on how policy is influenced, examining political ideologies and media framing, because they will be working with people on the frontline of these decisions.

Liz Beddoe says they created the book because there was no recent one like it, and felt students needed to understand the connectedness of ideology, policy and outcome.

“For example, the Government policy to sell off social housing has partially caused the housing crisis we are seeing today. This has an enormous impact on the lives of vulnerable people, and the social workers who work with them. It’s important for students going into the field to understand this.”

Social Policy contains 22 chapters from a range of academic contributors, who write about diverse topics such as caregivers, family violence, disabled rights and beneficiaries.

In choosing authors, Jane Maidment says they aimed to give a voice to those not usually heard from.

“There is a real cultural emphasis in the book; we have chapters on issues relating to Maori, Pasifika and migrants. We also wanted cultures relating to sexuality and economic status to have a voice too.”

Unlike other books focusing on social policy, there are also chapters on water quality and food security, because those issues connect with human services too.

Liz Beddoe and Jane Maidment both hope Social Policy will become a key text for social work students and researchers, and those from other connected fields of study.