Gravitational waves have been directly captured for the first time - Physics Professor David Wiltshire explains how this opens a new era of astronomy in his UC public lecture. 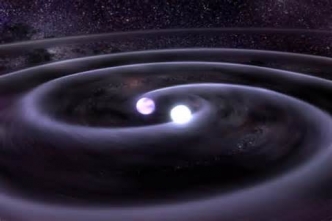 Gravitational waves have been directly captured for the first time ever, from the collision of two black holes  - University of Canterbury Professor of Physics Dr David Wiltshire explains what this means and the challenges ahead in this new age of astronomy in his UC Connect public lecture on Monday, 7 March.

In February, international researchers with the Laser Interferometer Gravitational-Wave Observatory (LIGO) announced they had spotted gravitational waves – ripples in space itself set off by violent astrophysical events.

It was on 14 September 2015 that the two LIGO detectors measured gravitational waves for the first time ever, produced by the collision of two black holes 1.3 billion light years away. This opens a new era of astronomy, a window on things we cannot observe by other means. It vindicates Einstein's 100-year-old prediction of gravitational waves, and the rotating black hole solution of Einstein's equations discovered in 1963 by a New Zealander, UC Emeritus Professor Roy Kerr, Prof Wiltshire says.

“From now on we will be able to ‘listen’ to the Universe with ‘ears’ that are not limited by the electromagnetic spectrum, completely changing our understanding. It is a moment in history every bit as important as when Galileo first pointed his telescope at the stars and planets, or when the first radio, X-ray, infrared or gamma ray telescopes were first turned on by 20th century astronomers,” Prof Wiltshire says.

In measuring distance changes a thousandth the size of a proton, this is also the most sensitive measurement ever achieved by humankind. It represents the culmination of four decades of work by thousands of experimental physicists, engineers, mathematicians, numerical modellers and astronomers, who together have had to overcome challenges in fields as diverse as seismology and fundamental quantum optics. Last December, the LISA pathfinder satellite was launched, the first step in taking gravitational wave detection to space.

This lecture will reflect on what has been achieved, the technological spin-offs and challenges ahead, and what we might discover in the new age of astronomy ahead.

To register to attend this free public lecture go to:  http://www.canterbury.ac.nz/ucconnect/