The University of Canterbury is using modern 3D-printing technology to preserve and study rare classical antiquities, many dating back more than three millennia. 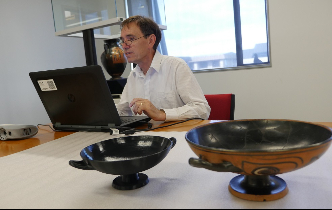 The name vase of the University of Canterbury's Logie Collection - a 525BCE cup painted by the Logie Painter (pictured right next to its 3D-printed scale replica) - was scanned and printed by UC academic Dr Don Clucas, Mechanical Engineering.

The University of Canterbury is using modern 3D-printing technology to preserve and study rare classical antiquities, many dating back more than three millennia.

A close inspection of the University’s priceless collection of fragile antique objects has been made possible thanks to collaboration between UC academics Don Clucas and Paul Docherty from the Mechanical Engineering department and the University of Canterbury’s Logie Collection curators Terri Elder and Penny Minchin-Garvin.

Selected ancient objects have been scanned and accurately reproduced to be used in the Mechanical Engineering teaching programme at UC. The 3D scanning of antiquities can allow low-cost replication via 3D printing. The replicas will be introduced into the Logie teaching programme this semester to enhance students’ learning experience.

The 3D scanner has been used at UC for over two years but Dr Clucas says the most unusual object he has scanned and 3D printed is a Babylonian cuneiform tablet from the University’s Logie Collection.

The terracotta tablet was made around 1700BC and lists individuals who have been granted plots of land. It is inscribed on both sides. The scribe used a phonetic and syllabic script called ‘Cuneiform’, made by pressing a stylus made of reed onto the wet clay.

“Cuneiform tablets deteriorate over time and as with everything else it is a case of dust to dust,” says UC Classics Professor Victor Parker. “So anything that can be done to replicate tablets in their three-dimensional form before they crumble is extremely important. Also, such replicas can be used for teaching purposes without risking increasingly fragile originals.”

The name vase of the Logie Collection – a 525BCE cup painted by the Logie Painter – was also scanned and printed. Logie Collection co-curator Terri Elder says the replica of the important Greek cup will be particularly useful for engaging with secondary school students.

“They will be able to handle the object and thereby better visualise and understand its use,” she says.

“The cup would have been used in a symposium (a Greek drinking party). It is one of the heroes of the Logie Collection, as there are only two other cups in the world by this painter, known to have survived.”

The University of Canterbury has two state-of-the-art 3D printing technologies.

“The replica cuneiform was made on a polyjet machine which spreads down thin layers of very small droplets of a photo polymer that sets when subjected to UV light. The process then prints the object slice by slice,” Dr Clucas says.

The advantage of this machine is it can make very precise parts with fine features.

UC senior lecturer in Mechanical Engineering and Director of the Centre for Bioengineering, Dr Docherty initiated the project to replicate the priceless antiquities.

“The project has been very exciting as it has allowed a new dimension of tactile interaction with the replicas of antiquities that would not be possible with the real thing. In the future, we hope to increase the number of scanned antiquities and put 3D representations of the collection online,” Dr Docherty says.

The process used to replicate the objects, often known as reverse engineering, begins by using an optical hand-held 3D scanner. The device projects light that is invisible to humans onto the object and uses cameras mounted at an angle to the light source to take around 15 frames per second of digital images. In order to record all surfaces, the operator moves the scanner as if they were spray painting.

Using substantial computer resources, the post-processing software stitches all the images together to make a virtual 3D object. Most scanners end there but the Artec Spider scanner can also record textures, so a full-colour 3D image is recorded.

“We can scan objects, including living creatures, from the size of a coin to an SUV,” Dr Clucas says.

The 3D image can be stored for later viewing, uploaded to the internet, or converted to a file that can be fed directly into a 3D printer that will make a full-size or scaled replica.