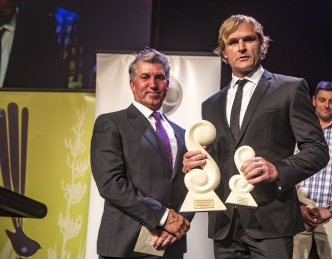 The 2016 UC Education Sports Coach of the Year has been awarded to Canterbury Rugby Coach Scott Robertson at the Sport Canterbury Hadlee Sports Awards.

The annual Sports Coach of the Year award, presented by Professor of Sport Coaching and Physical Education Richard Light, is sponsored by the University of Canterbury College of Education, Health and Human Development.

Robertson guided the New Zealand Under-20 rugby team to the Junior World Cup title in Italy in 2015 in an unbeaten run. He was also head coach of the Canterbury ITM Cup team which reclaimed last year’s Premiership title.

It was fitting that Professor Light presented the award, as a former professional rugby coach who published his latest book, Advances in Rugby Coaching, with a book launch hosted by All Blacks captain Kieran Read, Pro-Vice-Chancellor of the College of Education, Health and Human Development, Professor Gail Gillon says.

“The awards ceremony was a great celebration of Canterbury sporting achievement, with a full house at the Wigram Air Force Museum. We’re very proud to sponsor the coach of the year award,” Prof Gillon says.

UC Bachelor of Sport Coaching alumni were prominent at the awards with several graduates representing host organisation Sport Canterbury in the glittering event.

A UC 2014 graduate Atamira de Goldi was also a nominee in the UC Education Sports Coach of the Year category. Ata de Goldi returned to Canterbury after a breakthrough season coaching hockey on the West Coast to coach the Canterbury U18 Association Women’s team to the 2015 National Championship title.

First-year BSpC student Olivia McGoverne was nominated for the ASB Young Sportswoman of the Year award for both Cricket and Rugby, a valued member of the Canterbury U21 women’s cricket team, and the Canterbury senior women’s rugby team.

While personal sporting prowess is not a requirement to study towards a Sport Coaching degree, it does provide a context for study towards a post-competition career pathway, and the degree attracts prominent young sportspeople who are preparing to give back to the sporting community which supports and celebrates their current achievements.

The awards evening, with around 700 guests, celebrates Canterbury’s sports stars, coaches, and administrators. The awards, which were held at the Wigram Air Force Museum on March 4, recognise the highest achievers in sports in Canterbury and West Coast. There were a record 150 nominations across 29 sports.