Two University of Canterbury students have created an amazing scheme - Two Weeks Without - to support charities. 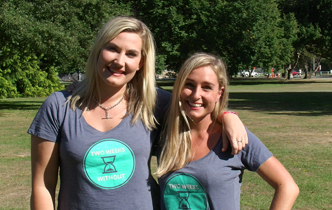 Two University of Canterbury students have created an amazing scheme - Two Weeks Without - to support charities.

The initiative connects people and businesses with charities by facilitating challenges that involve going two weeks without something of their choice - such as shoes, coffee or sugar. Participants make the sacrifice to raise money for Husky Rescue, White Elephant Trust or Help for the Homeless.

From today to March 13 a large-scale challenge involving 100 students from the University of Canterbury Emerging Leaders Development Programme will test the business model of Two Weeks Without.

Ten teams of 10 students will make sacrifices including no meat, no hot water, no use of cutlery, no beds, no reflection, no moaning, no sleeping after six in the morning, and no walking – instead having to hop, skip, jump or crawl.

The University of Canterbury Innovators programme for young entrepreneurs helped current student Bridget Williams and recent graduate Rachael Gresson bring their idea to life. The pair received a place in the Summer Start-Up programme which teaches students everything they need to know about establishing an enterprise. The programme also includes a scholarship to help fund the launch of the enterprises.

Two Weeks Without offers a creative and flexible way of supporting community causes. Challenges can be completed at any time or place and can be designed to suit any lifestyle or business. The initiative is beneficial for businesses as it fulfils the expectation that they give back to the community.

Williams, 22, and Gresson, 25, have backgrounds in student and community support – Bridget was president of the Student Volunteer Army from 2013 to 2014 and Rachael was on the University of Canterbury Students’ Association executive in 2014.

Williams recently lasted two weeks without shoes to raise money for Help for the Homeless and Gresson sacrificed make-up for Husky Rescue to create awareness about animal testing of cosmetics. Both Williams and Gresson fundraised around $200.

A prize-giving event will be held at the end of the Emerging Leaders’ challenge and the charities will receive donations raised by the student teams.