A HIT Lab NZ student's exploratory research of human-robot interaction could have an impact on the selection of service robots in households of the future. 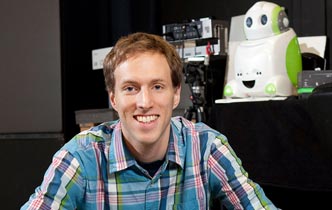 A HIT Lab NZ student’s exploratory research of human-robot interaction could have an impact on the selection of service robots in households of the future or in industries such as aged care.

University of Canterbury (UC) postgraduate student Jakub Zlotowski travelled to Japan to collaborate with researchers at the Advanced Telecommunications Research Institute International (ATR) in Kyoto to investigate whether initial negative feelings towards highly-humanlike robots would remain or change based on a robot's attitude or multiple interactions.

The study at ATR involved 58 native Japanese speakers (26 female and 32 male), aged between 18 and 36 years, interacting with a robot in a casual conversation and two simulated job interview scenarios.

Participants interacted with one of two different types of robot in the experiments. One robot was a Geminoid HI-2 second generation android, which is virtually a copy of a real human, while the other was the Robovie R2, which is a machine-like robot with some human features, such as a head, hands and a fixed smile.

During and after the job interviews, participants were asked to rate the robots in terms of their likeability and perceived eeriness.

Previous studies have found that highly human-like robots (androids) can generate strong negative emotions in people as they blur the line between humans and machines. The eeriness of human-like robots was first hypothesised by robotics professor Masahiro Mori in 1970, in what is known as the "uncanny valley" theory. The theory holds that when features look and move almost, but not exactly, like natural beings, it causes a response of revulsion among some observers. The "valley" refers to the dip in the comfort level of the subject.

Jakub’s new research found that several short human interactions with an android were sufficient to reduce its perceived eeriness, however likeability was driven more by the robots’ behaviour. This means the extra effort and expense involved in making a robot look human or display different facial expression is likely to be unnecessary in helping to increase acceptance of robots for certain tasks and activities.

Jakub says matching the appearance of the robot to suit the task is important for their future acceptance in social services.

“Both robots were perceived as less eerie after multiple interactions,” says Jakub.

“It is possible mere exposure affected this process. However, it could be that a robot's friendliness in appearance is more important for its likeability than human-likeness.

“These findings on both likeability and perceived eeriness are relevant for Human-Robot Interaction (HRI) designers,” explains Jakub.

With increasing use of robots in society, understanding the ways that humans interact with them is gaining more importance and Jakub is interested in exploring whether the Japanese results would be similar in Western cultures.

Originally from Poland, Jakub completed a master’s degree in Finland, a study exchange in the USA and a research fellowship in Austria before choosing to study at UC.

Based at the Human Interface Technology Laboratory NZ (HIT Lab NZ) on the UC campus for two of his three years of study, Jakub says the international connections of the HIT Lab NZ academics played a key role in securing his research with ATR, which is one of the leading pioneers in android technology.

“At the HIT Lab NZ, I worked in a very international team that was welcoming and open to sharing knowledge and expertise. It is a stimulating work environment, but we also have fun together," he says.

Now that Jakub has completed his studies on the UC campus, he is returning to Osaka to work on a new human-robot interaction (HRI) project, to further his goal of becoming a leading expert in HRI.

“I intend to promote the technology andhope to push the field and community of HRI a step further,” says Jakub.