A University of Canterbury doctoral candidate will take up the baton next year as the new conductor of the UC Christchurch Youth Orchestra (UC-CYO). 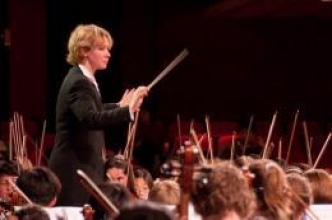 Helen Renaud will take up the baton next year as the new conductor of the UC Christchurch Youth Orchestra.

A University of Canterbury doctoral candidate will take up the baton next year as the new conductor of the UC Christchurch Youth Orchestra (UC-CYO).

The new UC-CYO conductor, Helen Renaud, is well known in Christchurch musical circles and will take up the role early 2016.

The Head of Music at Burnside High School, Renaud has been the conductor of the school’s orchestra for 13 years and of its Symphonic Band and Junior Concert Band for even longer.

Renaud is enrolled in the Doctor of Musical Arts programme at the University of Canterbury, investigating rehearsal techniques, programme planning and the development of youth and non-professional orchestras.

“As anyone working in schools will know, there’s a limited amount of practise time and it can be easily wasted. So I am looking at the most optimal ways to use it. I am also looking at what teenage minds respond to,” she says.

Renaud says she chose to study at UC because of the flexibility of the programme, allowing her to work on her doctoral thesis part-time while teaching Music at Burnside High School, one of the largest secondary schools in New Zealand.

“My supervisors are wonderfully understanding of my other commitments.”

Renaud officially takes over the UC-CYO in February, but has recently been auditioning students for 2016 places.

“Auditions have been really promising. There are some exceptionally talented students who have thoughtfully prepared. They have put in a lot of time, especially considering how busy school and university students are this time of year with exams.”

“Helen has a wealth of experience to share with UC-CYO. Her appointment is directly connected to her doctoral studies, and we are sure that UC-CYO will continue to grow and strengthen under her baton.”

Renaud replaces UC graduate Luke Di Somma, who had conducted the orchestra since February 2011 and moved to London, England, in September to pursue a career as a composer and conductor.

The University of Canterbury's state of the art Digital Screen Campus (DSC) will provide training for future leaders in film production, game ...