The UC Chancellor has witnessed the rededication of a WWI Memorial Window, recalling its great historical and emotional resonance for the University. 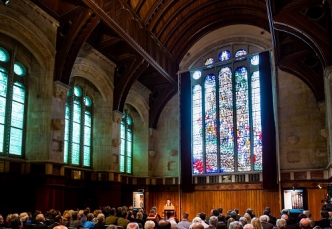 The Great Hall's restored stained-glass Memorial Window was rededicated to the memory of University of Canterbury staff and students who served in World War I.

The University of Canterbury Chancellor has witnessed the rededication of a WWI Memorial Window, recalling its great historical and emotional resonance for the University.

UC Chancellor Dr John Wood, CNZM QSO, was invited to speak as, for the first time since the September 2010 earthquake, visitors were welcomed back to the Arts Centre's Great Hall for a private rededication ceremony.

The Great War Memorial Window was rededicated to the memory of the University’s staff and students who served in World War I and who previously attended the institution once based on the site now known as the Arts Centre, including the School of Engineering, the School of Art, and Canterbury College (now the University of Canterbury).

Dr Wood spoke of how important it is to bear witness - to remember, reflect and pay respect - to the 235 men who fell in the service of our country.

“For the University of Canterbury, this place, this time and this occasion are very close to the heart and soul of the institution. This was the site which the University occupied for the greatest part of its 143 years of existence, and to which in a modest way, it will return in 2016. This College Hall was built with the proceeds from our endowment lands; the Great Window was largely designed by one of our most prominent professors; and paid for by subscriptions raised on behalf of Canterbury College by another,” he said.

“The only irony, but a considerable one, is that the window we now re-dedicate was proposed as a World War I memorial as early as 1919, but was not completed  and available for dedication until September 1938, almost twenty years later and only a year before University of Canterbury graduates started serving again, in the Second World War.”

Dr Wood noted that New Zealand lost a significant proportion of a whole generation of leadership through these wars.

“The numbers of the most able-bodied and best educated who were lost to us through death, or the debilitating consequences of suffering wounds and disease were staggering. The names of the 235 of the dead are before us. The total number of all students on the books of Canterbury College and the University in 1914, the year of the outbreak of World War One, was 437.

“The sacrifice of our predecessors was a terrible one, its consequences enduring and still with us. But without that sacrifice we would not be here, at this place, at this time, doing what we are doing today. We will remember them.”

The Great Hall restoration also features bronze plaques to honour those members of the University who served, and those who died. Thousands of hours have gone into the restoration of the Great Hall, by the Arts Centre Trust. It is expected to re-open to the public by autumn 2016.

The University will reconnect with its history in the heart of Christchurch when it relocates UC Music, UC Classics and the Logie Collection into the Arts Centre in 2016.