A Kiwi mathematician whose work ushered in 'the Golden Age of Black Hole Physics' and an innovative engineer whose companies are global leaders will be honoured by UC. 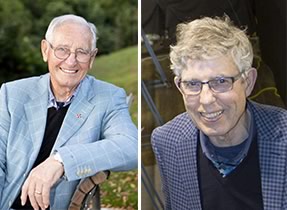 A Kiwi mathematician whose work ushered in ‘the Golden Age of Black Hole Physics’ and a Taranaki engineer whose companies are global leaders in bitumen technologies and heavy engineering are to be honoured by the University of Canterbury (UC).

Professor Kerr CNZM, FRSNZ, is an eminent mathematician, known internationally for discovering the Kerr Vacuum, an exact solution to the Einstein field equation of general relativity.

Prof Kerr began his long association with the University of Canterbury in 1951, when he went straight from St Andrews’s College into third-year mathematics, earning a Bachelor of Science degree in 1954 and a Master’s of Science in 1955. He went then to Cambridge to research his PhD, and was awarded his doctorate in 1959.

From England, Dr Kerr moved to the United States, where as a post-doctoral student in Syracuse, New York, he worked with Professor Peter Bergmann, Einstein’s collaborator.

Prof Kerr’s discovery triggered a revolution in the field of astrophysics, and is now known as the ‘Kerr Vacuum’.

Prof Kerr returned to New Zealand and the University of Canterbury in 1971, where he became a Professor of Mathematics for 22 years until his retirement in 1993. Prof Kerr developed strong links with the department of physics and astronomy, where his seminal work the Kerr Vacuum provided the basis of much research and teaching.

John Matthews is a brilliant engineer and businessman, also known for his tireless support of students, the arts and the wider community.

Mr Matthews studied at the University of Canterbury, graduating with a Bachelor of Engineering in Mechanical Engineering in May 1964. He went on to establish and operate New Zealand’s largest and most enduring heavy engineering fabrication workshop, Fitzroy Engineering.

At times Fitzroy Engineering employed more than 1000 people, and has played a significant role as a contractor in the energy sector since the late 1970s. In the late 1990s Mr Matthews commissioned the largest bulk bitumen terminal and integrated bituminous products manufacturing facility in New Zealand.

He continues to be an innovator in the development bituminous products and road surfacing systems.

Mr Matthews also has a strong eye for design. He was the engineer for the acclaimed sculptor Len Lye, helping the famous artist turn his ideas into physical reality. As the founder and chairman of the Len Lye Foundation, Mr Matthews plays an active role in ensuring these sculptures remain on display in New Zealand.

Mr Matthews has a genuine interest and empathy for students and young engineers. Since the late 1980s he has had a close and productive working relationship with the University of Canterbury’s College of Engineering, by sponsoring student research projects at both undergraduate and postgraduate levels.

His company, Technix Group Ltd, has had a long association with UC. It has funded many postgraduate students for Master’s and PhD projects relating to both Technix and Len Lye in UC’s Mechanical Engineering Department. Four of these students will graduate alongside Mr Matthews and Prof Kerr when they are awarded their honorary doctorates at a graduation ceremony in Christchurch this month.

The UC graduation ceremonies will take place on 15 and 17 December.