Two UC biological scientists have discovered a new plant that has been named in the Top 10 New Species of 2015 by an international committee of taxonomists. 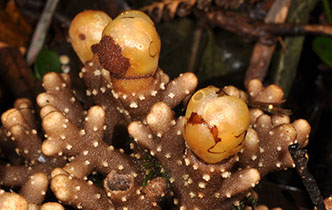 Two University of Canterbury biological scientists have discovered a new plant that has been named in the Top 10 New Species of 2015 by an international committee of taxonomists.

Husband and wife team Dr Pieter Pelser and Dr Julie Barcelona, along with colleagues from the Philippines, discovered a new parasitic plant species and named it Balanophora coralliformis.

The new species was discovered in 2014 and during field work in an area previously investigated, where the unknown plant had been photographed, by Leonardo Co, a colleague who was shot and killed during fieldwork in the Philippines in 2010.

“We kept our eyes open for it and ultimately found it. This species is only known from a single mountain ridge in cloud forest on the slopes of Mount Mingan on Luzon Island in the Philippines,” says Pelser.

Pelser says it is an honour that the new Balanophora species was included in the Top 10.

“More importantly, the Top 10 focuses attention on the importance of discovering and naming new species in the field of taxonomy. Taxonomy is the cornerstone of all biological sciences, because you cannot study what you don’t know exists,” says Pelser.

Pelser says that he enjoys the diversity of his work.

“My field is very broad and ranges from collecting and documenting plant diversity in areas where no biologist has been before to working with historical plant specimens in a herbarium and performing genetic analyses in our laboratory.

“Above all, I enjoy opening the eyes of students and the general public to the amazing and fascinating diversity of plant life on this planet. Plants are so much more than the nice green background of our lives.”