Smudge mobile app designer and University of Canterbury graduate Reuben Bijl is one of five finalists in the Young Achiever category of the New Zealand Hi Tech Awards. 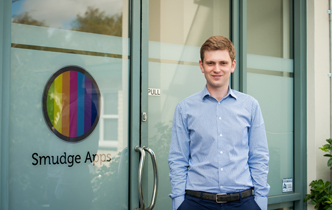 Smudge mobile app designer and University of Canterbury graduate Reuben Bijl is one of five finalists in the Young Achiever category of the New Zealand Hi Tech Awards.

This is the second time Bijl has been recognised by the awards for his skills and entrepreneurial achievements. Winners will be named in Wellington on May 15.

In 2008, at the age of 22, Bijl taught himself how to build mobile apps over the summer and, with Toby Vincent, he made enough revenue to give up his day job and set up a company called Smudge Apps.

Two years later he had secured the loyalty of big name customers like Yellow and Vodafone, and established Smudge as an employer of choice - attracting a number of Canterbury graduates.

After graduating from the University of Canterbury with a Bachelor of Commerce, majoring in computer science, and a Bachelor of Music, Bijl and fellow student Vincent spent the summer experimenting with, developing, and releasing mobile apps. Within three months they created more than 50 apps, including one which became the number one free app on the United States App Store.

“We were making more money off our apps than our day jobs. We started developing full time and set up Smudge Apps in 2008. We showed consumer-facing organisations how they could enrich their brand value and user experience with mobile technology.

“We developed solid relationships with companies and convincing them they could balance their IT with a mobile app development team focused on delivering results.

“Over the years Smudge has designed hundreds of apps, which have been downloaded more than seven million times. In the early days we could create and release an app within 24 hours. Now we are delivering hugely successful apps that improve business productivity, profitability, and customer relations for major brands, including Vodafone, Coca Cola Amatil, Sky TV, Independent Liquor, Dominion Breweries, BMW and the Police.

“The mobile app market is still very young with plenty of opportunity, as more corporations learn about the ability to transform business process and achieve significant returns on investment with mobile computing.”

Bijl was one of seven people recently appointed to Inland Revenue’s new Information and Communications Technology Reference Group, to help identify innovative ways to continue delivering improved and easy to use ICT services.