New Zealand motorists are contributing to traffic snarl-ups by responding too late to warnings of approaching congestions, a UC transport research expert says. 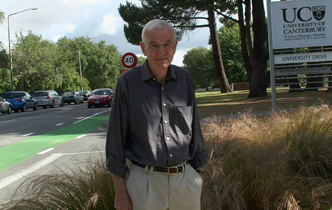 New Zealand motorists are contributing to traffic snarl-ups by responding too late to warnings of approaching congestions, a University of Canterbury transport research expert says.

The impacts of traffic jams in New Zealand’s major cities could soon be greatly reduced, thanks to pioneering research by University of Canterbury transport engineering experts. The researchers are exploring how the movement of vehicles on New Zealand’s city roads can be more efficiently managed after accidents and breakdowns.

University of Canterbury transport engineer Professor Alan Nicholson says their research shows drivers tend to divert off the motorway in large numbers only after a slow queue becomes visible.

Along with Dr Glen Koorey and postgraduate students, Professor Nicholson has been studying Auckland’s motorways, with the support of a $170,000 grant from the New Zealand Transport Agency.

Professor Nicholson says the aim of the project is to improve the reliability of New Zealand’s busy motorways and roads by finding ways to reduce traffic problems caused by unplanned accidents. New technology such as Intelligent Transport Systems (ITS) and better incident management plans are helping.

The study area included a portion of Auckland’s northern motorway which is part of State Highway 1 and is a key part of Auckland’s traffic network. The research shows that it is possible to use the latest digital technology to adapt traffic pattern changes following an accident.

“Traditionally, management of our major city arterial routes and motorways is fairly ad hoc, relying on manual intervention and educated guesswork to try to redirect or re-prioritise traffic if something unexpected occurs.

“Our research uses computer simulation models, together with collected field data, to reproduce the effects that a range of incidents will have on the network. The model simulates both the road network and the traffic signal system, which automatically adjusts traffic signal timings at our intersections, based on traffic demand.

“We took a section of Auckland's northern motorway, replicated it in a model, and then applied some actual and hypothetical incidents to it. Then we tried some different treatment strategies to see whether they improved the situation better than the automatic default traffic signal system adjustments.

“People are often more concerned about the variability of their trip times rather than the absolute duration. They can plan for a longer journey time if they know about it. It is the uncertainty that causes problems.

“However, these solutions may only work in some situations. In peak hour congestion, no amount of tweaking will improve an unexpected incident situation but there is the potential in the shoulder periods of peak time to make considerable gains,” Professor Nicholson says.