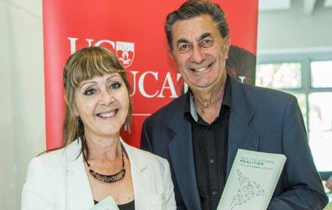 Co-editor and University of Canterbury (UC) Professor of Māori Research Angus Macfarlane (affiliates to Te Arawa) says the book is exceptional in that it spans the entire education sector – from the early pre-school years through to the tertiary space – and also draws on the sociocultural realities of Indigenous learners from three distinctive global locations.

“We took a risk in encompassing the whole education sector in a single volume, but in doing so we feel that we are offering access to a wide range of educational consumers.

“The book pays tribute to the valuable body of work that informs cultural theory and insights, but also includes a lens that considers social aspects such as whānau and Indigenous communities’ worldviews.”

Professor Macfarlane says that those who contributed to the book were known and trusted as knowledgeable about diversity. The book’s contributors include UC’s College of Education, Health and Human Development Pro-Vice-Chancellor Professor Gail Gillon (Ngāi Tahu). Indigenous contributors from overseas include University of British Columbia (UBC) Assistant Professor Cash Ahenakew of the Cree nation in Canada, Sereana Naepi, an Indigenous Fijian doctoral student at UBC, and Professor Susan Page, an Aboriginal academic from the Centre for Indigenous Knowledges at the University of Technology, Sydney, (UTS) and Michelle Trudgett, Professor of Indigenous Education, also at UTS.

Second co-editor Dr Sonja Macfarlane, (Ngāi Tahu; Ngāti Waewae) UC Senior Lecturer in Health Sciences, says the book has been a wonderful opportunity for contributors and co-editors to work together around the kaupapa (ideologies) of the work and to add to the tide of growing knowledge around sociocultural realities in education and learning.

Third co-editor is Dr Melinda Webber (Ngāti Whakaue, Ngāpuhi), Senior Lecturer in the School of Learning, Development and Professional Practice at Auckland University. Her chapter drew from a recent Ka Awatea Project which examines the nature of teaching, learning and home socialisation patterns that support Māori students’ success in her home town of Rotorua.