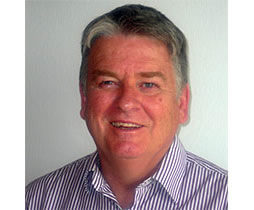 Associate Professor Rick Beatson will receive the University of Canterbury’s prestigious Innovation Medal this year for his work with ARANZ Geo and ARANZ Medical – companies which won both their categories at Champion Canterbury Awards recently.

The Innovation Medal is awarded annually by UC for excellence in transforming knowledge and ideas so they are adopted by the wider community in ways that contribute beneficial value. It is the University’s highest recognition of an outstanding innovation and is of similar prestige and standing to the UC Research and Teaching Medals.

This year’s Innovation Medal recipient, Associate Professor Beatson (Mathematics and Statistics) said he was extremely pleased and grateful for the recognition of his work.

“The surface reconstruction work involved in the manufacture of artificial limbs with custom fitted sockets was particularly satisfying. Not many mathematicians have their abstract mathematics applied so directly to helping others,” he said.

“Overall, perhaps the biggest thrill has been to see my mathematics play its part in creating 109 jobs in Christchurch and 46 overseas.”

“His major collaboration has been with Applied Research Associates New Zealand (ARANZ) and it’s no coincidence that ARANZ Geo and ARANZ Medical won their categories in the Champion Canterbury Awards last month,” Weaver said. “This is a superb example of university research powering successful business development.”

“Following the initial development of the RBF techniques, I collaborated with extremely talented engineers at the Christchurch company ARANZ,” Beatson said. “Due to their skills in both engineering and mathematics and their openness to new ideas, they were willing to take the risk of adopting my new methods. They strengthened them and applied them to problems in scanning for the manufacture of prosthetic devices and to software that makes substantial improvements in the mining exploration industry.

Beatson is currently working on methods which given only data automatically create optimal local approximations and then combine them. “Such methods would be useful, for example, in tomography where one wants a good image, but doesn’t want to sample so much as to destroy the optic nerve in the process of obtaining it,” he said.

Beatson will receive his Innovation Medal during the University of Canterbury 2015 Chancellor’s Awards Dinner in November.