Three Turkish red pine seedlings from the original Lone Pine at Gallipoli will be planted around Christchurch on April 25 to commemorate the 100th Anzac Day anniversary. 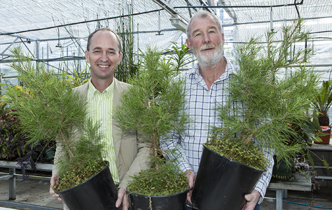 Three Turkish red pine seedlings from the original Lone Pine at Gallipoli will be planted around Christchurch on April 25 to commemorate the 100th Anzac Day anniversary later this month.

The First World War campaign in Gallipoli, Turkey, was one of the darkest events in New Zealand military history. New Zealand and Australian troops suffered heavy casualties and to this day the battles are commemorated on Anzac Day.

Of the 7500 New Zealand casualties at Gallipoli, 2721 soldiers died or more than one in four of those who landed there. The word Anzac has become a lasting label synonymous with trans-Tasman co-operation and friendship. The Lone Pine tree in the Commonwealth War Graves Commission cemetery on the Gallipoli Peninsula holds the highest memorial significance for Australians and New Zealanders.

“These trees are providing a memorial to honour the memory of all those who have served and passed. They will be planted at The Park of Remembrance, Burnham Military Camp and Rannerdale Home.”

The trees have been grown in the past for the Hawkes Bay Regional Council. The Scion nursery has a quarantine facility, a nursery sanitation policy and monitors any issue with the trees it grows for various trials throughout New Zealand.