A University of Canterbury Māori doctoral student who graduates today had her research approved by the University 20 minutes before the February 2011 earthquake hit. 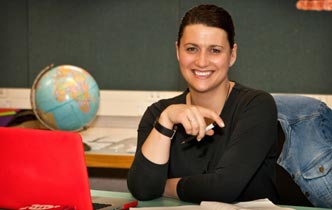 A University of Canterbury Māori doctoral student who graduates today had her research approved by the University 20 minutes before the February 2011 earthquake hit.

Dr Riwai-Couch graduates today with a PhD in education after investigating ways that schools and iwi can work together to better support Māori students to do better at school.

She looked at three case studies, including representatives from the Ministry of Education, schools from the North and South Islands and iwi education spokespeople.

“In New Zealand, Māori students are not as successful as their non-Māori peers, but students at Te Kura Kaupapa Māori o Te Whanau Tahi, like many other Māori immersion settings, excel in both Māori and English.

“When iwi and schools work together to make decisions about what is taught at school Māori students are more likely to achieve better school marks, as well as be more connected with their cultural identity.

“Approaches to achieving education equity, including schools working with iwi and Māori, are important for informing education approaches and strategy. How those approaches are informed, developed and implemented is equally important in achieving models likely to positively affect Māori achievement in education.

“This is also important in ensuring that participation expectations of iwi are co-constructed, reasonable and appropriately resourced. A framework for iwi-school communities of practice is proposed, including recommendations for iwi, schools and the Ministry of Education.”

Dr Riwai-Couch is one of 1200 Canterbury students who graduate this week. A policewoman, a diplomat and a chief executive will be awarded honorary doctorates.

Superintendent Sandra Manderson will be awarded a Doctor of Laws. She was the first female District Commander to be appointed in New Zealand.