Cycling from the Pole to Paris for climate change

A UC postgraduate student is cycling from the Pole to Paris in time for a United Nations meeting to negotiate a climate deal at the 21st Congress of the Parties in December. 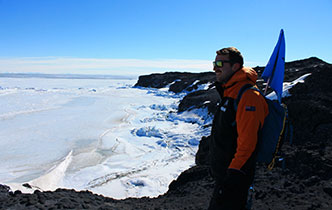 A University of Canterbury postgraduate student is on a campaign cycling from the Pole to Paris in time for a United Nations meeting to negotiate a climate deal at the 21st Congress of the Parties in December.

Dr Price completed his PhD at Canterbury last year. His research focused on improving techniques to monitor the Antarctic sea ice cover using satellites. This goal was a small part of a global scientific effort to advance our knowledge of how the Antarctic system works.

"The Paris congress will be the culmination of efforts by hundreds of policy makers, thousands of scientists and millions of activists which provide the basis on which a decision will be made. That meeting in Paris will dictate the future of billions of people. This is most certainly no overstatement. The decisions to be made involve humanity’s positive actions to respond to climate change,’’ he says.

"I have started the journey from the Antarctic to Paris to make the public aware of the importance of this meeting in Paris, but also, to motivate them to engage in the climate story. We want to hear the public’s voice on this.  The journey will be documented in a video series, beginning with the impacts of climate change at the poles and highlighting the consequences globally if we fail to succeed in Paris.

"An agreement in Paris will be a signal from the highest level that action must begin now. If a climate deal is not made, we have missed our opportunity for action. This could come at the cost of billions of people all over the world. We all need to take responsibility and put pressure on our own leaders now, to ensure that they do the right thing for us in Paris.

"My journey actually started in the Antarctic and I have spent the summer planning the project.  I depart Christchurch next Tuesday and fly to Brisbane. I plan to be in Paris for the first week of December after cycling through Australia, Indonesia, Malaysia, Thailand, Bangladesh, India, Nepal, China, Central Asia and into Europe. My Pole to Paris campaign has a second component. A Norwegian colleague will be running from the Arctic down to Paris where we swill meet up.

"Understanding how our planet works is a worthy endeavour in itself, but given our current situation, it has never been of greater importance. I’ve spent the last decade studying earth and environmental sciences but have also followed the climate debate in politics and society.

"Science is trying to establish how fast Earth’s systems are going to respond to climate change. Society is still arguing about whether it is happening or not and seems to be baffled by the volume of information and disinformation out there.  This gap between science and society needs to be bridged.

"I’m fed up of the term climate change. It doesn’t portray the scale of the problem. Society needs to shed the idea that climate change is a green or an environmental issue. It is already becoming many peoples’ issue around the world and will eventually become everybody’s issue if we fail to act."