Canterbury University Press is publishing the first book dedicated to the life and work of artist Olivia Spencer Bower. 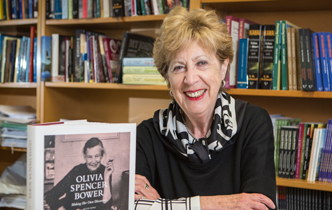 Art historian Julie King is the author of the new biographical art book about the life and work of Canterbury artist Olivia Spencer Bower.

“I paint for myself. That’s the only way. For when you paint to please it’s not the honest thing and inhibits the chances of discovery.” – artist Olivia Spencer Bower.

This belief would lead the renowned Canterbury artist to establish the Olivia Spencer Bower Foundation Art Award, an award for emerging artists that gives them freedom to create.

Through this award, a younger generation has come to know Spencer Bower’s name, but much has remained unknown about the artist and her work – until now.

Author Julie King says the book offers an insight into Spencer Bower’s art that reveals the close ties between her personal circumstances and her painting.

“I found that so much of her life was present in her work – it’s why I took a biographical approach,” King says.

Born in England, Spencer Bower came to New Zealand as a teenager. She studied at the Canterbury College School of Art (now the University of Canterbury School of Fine Arts) and, in 1929, the Slade School of Art in London. In the 1930s she returned to Canterbury and became part of a notable generation of artists, including Rita Angus.

Canterbury University Press Publisher Catherine Montgomery says it was hugely important to everyone involved with the book that this introduction to Spencer Bower should also be a beautiful object and a fitting showcase of her work.

“Aaron Beehre has achieved this through his exquisite design of the book, from the thoughtful layout of the illustrations to the jacket which features Marti Friedlander’s captivating photograph of Olivia,” she says.

As the book reveals, Spencer Bower’s life and career were not without challenges, including two world wars and the Depression. Recognising the difficulties that she had faced, she began thinking about an artist’s award scheme some two years before her death.

The resulting Olivia Spencer Bower Foundation Art Award is a continuation of Spencer Bower’s contribution to the arts community, funded by the sale of her art collection.

This year’s recipient, artist Jacquelyn Greenbank, believes the award will be a pivotal point in her career. “It has given me a new level of confidence, clarity, support and structure,” she says.

Malcolm Ott’s afterword to the book confirms this is exactly what Spencer Bower wanted for artists: the chance to develop their potential by having the opportunity to concentrate on their practice – the chance to make their own discoveries.

Julie King came from England to teach art history at the University of Canterbury. She has curated nationally, touring exhibitions of works by Sydney Lough Thompson and Margaret Stoddart.