The University of Canterbury has won the new University Challenge television quiz series. 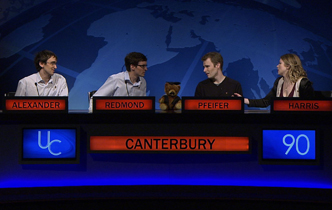 The University of Canterbury has won the new University Challenge television quiz series.

The new series marked the return of the long-running New Zealand television quiz show which ran between 1976 and 1989. Canterbury last won the series in 1988. Canterbury beat Victoria in the semi-finals and Auckland in the final yesterday.

Canterbury’s team captain, former Oxford University student Gerald Pfeifer, says it was an amazing feeling to know they will forever be part of a tiny club of people who have won University Challenge.

“There will be a line immortalising what we’ve done in Wikipedia whatever else they go on to do for the rest of our lives. I don’t think that pleasure will ever really fade away. It was quite surreal at the end. We’d made a substitution in the semi-final due to the paucity of science questions, and there was a horrible moment where we missed a science starter.

“We then gave the opposition another starter through an error and I had a horrible gut feeling that we were going to lose because of that decision we’d all made together. I’d even said we were going to have to live with it if the substitution cost us the match.

“But then, somehow, I knew a couple of the next starters and we were able to pull ahead. After that, we were on a roll and just kept the same atmosphere and tried to keep it going, as the semi and the final were filmed back-to-back.

“This series was so high-stakes, and weeks’ worth of work boiled down to one segment of eight minutes or so, going in pretty much level, winner takes all, loser goes home with nothing. We’d set out all week to leave nothing in the tank, so if we lost, there would be no regrets about what more we could have done.

“It was a tremendous release of pressure afterwards, and I vividly remember walking around the set afterwards, with the used question cards strewn over Tom’s desk, deserted under the warmth of the lights, with everyone having drinks in the foyer.

“It felt awesome. It’s something I’ll remember for the rest of my life, and that powerful shared experience will be something that always draw the five of us together.”

Harris says she felt Canterbury was the most organised and cohesive team.

“We had six practices and tested ourselves with the UK show on YouTube. We prepared quiz questions and strategically looked at how we communicated and where we should sit. We made some great friendships with students from other universities. Our mascot was Ernie, named after one of our most famous alumni, Lord Ernest Rutherford.”