Are NZ women on equal job footing with men?

Today many consider that women in New Zealand and in other industrialised countries are competing on equal footing with men on the job market. 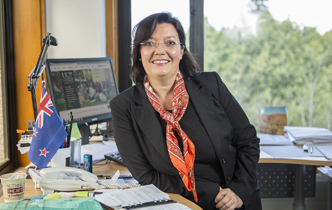 Today many consider that women in New Zealand and in other industrialised countries are competing on equal footing with men on the job market.

However, University of Canterbury business and economics associate professor Annick Masselot says this is not quite true.

“The gender pay gap is still at 10 percent and women are still over-represented in segregated traditional gendered professions that are underpaid and undervalued such as care work, cleaning and cooking.”

Associate Professor Masselot will give the university’s first What if Wednesday public lecture of the year on campus next week (March 11). See here for a preview YouTube clip: https://www.youtube.com/watch?v=dGhNPOvFnsQ.

“About 35 percent of New Zealand women work part-time because they also need to do housework and care for children and other dependents. Even though New Zealand men participate in domestic work more than men in other industrialised countries, women in New Zealand do more than double the unpaid house-work and care.

“Women continue to disproportionately experience the double burden of paid work on the labour market and unpaid work at home. New Zealand women outperform men in education. Two-thirds of university graduates are women and research shows that women are ambitious, yet only 12 percent of company directors on the New Zealand Stock Exchange top 100 listed companies in 2013 are women.

“Only 19 percent of partners in Auckland’s top legal firms are female, despite there being more women than men legal graduates since 1993.”

Associate Professor Masselot will raise issues such as work-life balance and legal rights relating to equal treatment between women and men. She says New Zealand’s legal rights to balance work and life are of a reasonable standard when compared to other developed countries.

However, like in other countries, the legal protections, based on an outdated male breadwinner-female caregiver social norm, are inadequate and, even when relevant, are under-enforced or simply ignored.

“Cultural stereotypes are still very much alive across New Zealand and women are still perceived as the main carers and therefore not primarily as workers with full employment rights.

“New Zealand women face high levels of discrimination because many employers still consider that women should first and foremost be carers for children or other dependents and that they are only secondarily interested in paid work. Discrimination takes place before women have children. This leads to unequal pay and gender segregated labour market.”