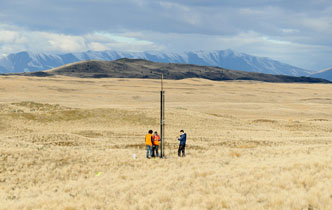 The small supersonic rocket launch from near Tekapo on July 26 was an attempt to break the New Zealand and world I-class altitude records which stood at 1117 and 4324 metres respectively.

Wright says he decided to design and construct a highly-optimised rocket to make a more serious attempt - this time at the world record.

The 740 millimetre rocket, named Milly, was launched with the help of PhD Student George Buchanan and other members of the UC rocketry project near Lake Tekapo.

From the launch, the rocket, reached speeds in excess of 2000 kilometres an hour and accelerated so fast it broke the sound barrier just 70 metres above the ground. During this flight GPS data showed that the rocket reached altitudes in excess of 4889m eclipsing both the previous New Zealand and world records.

"By recording the highest ever flight for an I-class rocket we hope that New Zealand's position in the world of high power rocketry will be significantly bolstered,’’ Wright says.

"This proves that we can both compete on a world stage and lead the way by using innovative techniques to vastly improve performance of these vehicles.

"The launch acted as verification for new systems to be used by the rocketry project. These included a new altimeter and tracking system, a high performance graphite expander to improve the performance of the motor and a five metre launch guide to provide a straighter ascent to maximise altitude. The barometric pressure and GPS data received from the launch has been sent to the New Zealand Rocketry Association for verification.

"The record attempt was important for testing a new launch location suitable for the next phase of supersonic control research for the UC rocketry project. The site at Tekapo is ideal as it has 10 kilometres of land with very few trees, low wind speeds and clear air due to the Southern Alps and about seven kilometres altitude available without requiring the closure of airspace.''

The University of Canterbury runs New Zealand's first and only rocket course, under the supervision of Rutherford Discovery Fellow and senior electrical and computer engineering lecturer Dr Chris Hann.

The course has the backing from Rocket Lab Ltd in Auckland in the second semester which is open to all engineering students.  See a University of Canterbury rocket launch on YouTube here: http://youtu.be/WT1_uBtmpyg.

The engineering course students are designing and implementing everything relating to rockets including the airframe, 3D printing of canards, rocket engine design, instrumentation and sensors, control systems and parachute recovery.