University of Canterbury engineers are carrying out the world's first earthquake damage-resistant bridge testing on campus. 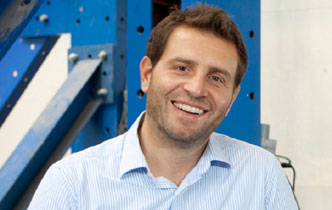 University of Canterbury engineers are carrying out the world's first earthquake damage-resistant bridge testing on campus.

Dr Alessandro Palermo says his research team has been testing New Zealand’s first concrete bridge that incorporates damage-resistant seismic technology along with self-centring capability. The bridge parts have been assembled and tested at the University of Canterbury. See: https://www.youtube.com/watch?v=QjdI7j8QLa0&feature=youtu.be.

"The bridge part is a fully prefabricated half-scale multi-column bridge support suitable for a typical New Zealand highway bridge. The specimen we are testing is three and a half metres high and about six metres long. It’s most likely the biggest bridge specimen ever tested not only on campus but in a New Zealand laboratory.

"Our bridge test specimen weighs more than 23 tonnes. It will be loaded with an additional 40 tonnes to simulate the weight of the bridge deck it will support. The testing is part of the ABC research project funded by the Natural Hazards Research Platform.

"Although a lot of research has been carried out in the United States and previously in Canterbury, this series of tests features innovative construction details which makes solutions not only structurally sound but also cost-effective.

"Prefabricating the whole bridge part in the factory means acceleration in the speed of construction and better quality control and it saves significant time in construction. The bridge parts are then transported to the construction site for assembly.

"Past experience from prefabrication of bridges in the United States shows only a few weeks or even days are needed to construct a bridge, compared to the traditional cast-in-place construction which can take several months or even years.

"Also changes to the connection to replace the fasteners after an earthquake means that bridges will not be closed for a long time for any repairs.

PhD candidate Mustafa Mashal, who has been heading this research part, says external fuses at the column connections will absorb seismic energy and thus, eliminate damage to concrete columns and the steel bars inside them. This will also protect the footings and cap beam from suffering any structural damage following a big earthquake.

Dr Palermo who is supervising the project says New Zealand had already started implementing the early technologies for self-centring bridges 40 years ago. The South Rangitīkei viaduct designed by Kiwi inventor and scientist Dr Ivan Skinner was the first self-centring bridge in the world.

Several organisations involved in the Christchurch rebuild including Opus and Stronger Christchurch Infrastructure Rebuild team (SCIRT) have been favourably impressed.  Further testing will be carried out over the coming weeks.

"The Christchurch rebuild can be the real driver for using new seismic design technologies available from the UC bridge programme.

"We want to find technical solutions for bridges which are quick to construct and erect on the site; that are resistant to earthquakes and with higher material quality control and more importantly that are cost-competitive,’’ Dr Palermo says.