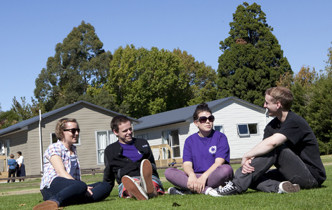 To take some pressure off the Christchurch housing market the University addressed the urgent need for student accommodation late last year.

Construction started just before Christmas when Hawkins Construction began building 15 four bedroom houses each with a floor area of 103 square metres for 60 students on the Ilam campus Christmas, which was completed on time.

Construction Manager Paul Brailey says the design of the houses was by Spanbild and was the same design as what Hawkins provided for the Ministry of Business, Innovation and Employment on Linwood Park and Kaiapoi Domain following the 2011 earthquake, allowing the project to progress quickly.

"Other design consultants also had to provide site set-outs and services drawings so construction could get underway prior to Christmas,’’ Brailey says.

"The first delivery of materials from Spanbild arrived on December 23 and the remainder of frames and trusses were all on site by January 6 this year.

"Window manufacture also started during this period with the first four house lots delivered from January 20. The project averaged 50 staff on site at its peak.

"In comparison, the first eight buildings at University’s Kirkwood village were delivered in eight weeks which equated to a floor area of 1152 sq m, whereas the Waimairi house project managed to complete 1545sq m of floor area in the same time.

"This was an excellent project where all parties involved in the project, from the UOC staff, consultants, Hawkins staff, build teams and subcontractors, all combined to ensure production and delivery targets were met without too much fuss and to a very high standard,’’ Brailey says.

"We are sensitive to the city’s housing situation and we see the Waimairi Village as exciting for the Christchurch economy, for the university and for students.

"We will continue to talk to neighbours and interested parties in the area about providing more accommodation on the Dovedale campus in future as the University continues to contribute to the rebuild,’’ Dr Carr says.

The Waimairi Village will be opened next Thursday morning, April 3 from 11.30am.